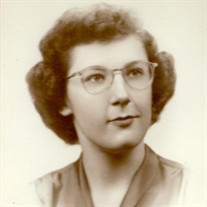 Alice Leola Erb, 89, passed away on August 21, 2021 at Lake View Terrace Memory Care in Lake Havasu City, AZ. Throughout her life, Alice was a fiercely independent spirit who did things her way, approaching life with deep curiosity, gritty practicality, and a fearless sense of adventure. She was born on Nov. 21, 1931, to William Egan Erb and Nina Belle Corl Erb at their family farm on Wolf Creek, near Adrian, MI. She joined an older sibling, Angele, and became a big sister to Bill two years later. The Erb family moved a number of times before settling in Brooklyn, MI, when Alice was in grade school. The family built a home there, and Alice helped with the construction. She also loved helping her father tend their gardens to ensure the family had fresh fruit and vegetables. Alice graduated from Brooklyn High School in 1950, and continued her education at Alma College, majoring in music education. Alice was a talented musician, both at the piano and as a classical singer. A soprano, Alice performed pieces by Bach, Scarlatti and Schumann at her junior year recital. After graduating from college in 1955, Alice worked as a music teacher at several schools in Michigan, including Elk Rapids and Traverse City. In the mid-1960s, she heeded a doctor’s suggestion that the desert Southwest might offer a better climate for her health. She headed to Arizona to find out. Alice and Arizona were a match, and she never looked back. She landed teaching jobs in Dateland, Coolidge, and back to Dateland, where she stayed to teach generations of students at Dateland Elementary School. In the beginning, she had Spanish-speaking students who didn’t speak English, and Alice didn’t speak Spanish. Soon they were teaching each other. During her teaching years, Alice spent many summers waitressing at restaurants near the Grand Canyon. Alice wrote home that despite hours on her feet every day, she loved the job because she got to talk with travelers from around the world. After her teaching years, Alice stepped into another community service role as manager of the Dateland Public Service Co., which ran the community’s water system. In 2003, Alice initiated plans for a new water system to provide affordable drinking water to local residents, working on applications that later secured $2.4 million in federal funding for the project. Later, Alice worked in the gift shop at the Dateland Travel Center, usually staffing the cash register and chatting with travelers who pulled in off I-8. She enjoyed the conversations — then headed home to the privacy and solitude she cherished, with her beloved cats for company. From her porches and windows, Alice enjoyed watching the circle of life in the Arizona desert, from the antics of coyotes, jackrabbits and roadrunners to the colorful desert flowers that bloomed each spring. She especially loved to watch the comings, goings and maneuvers of aircraft during the years of activity at the former Datelan Army Airfield. The gratitude and affection that Dateland area residents felt for Alice became apparent several years ago, when close friends Roland and Charna Walker learned that her home needed significant repairs and upgrades. Teams of volunteers worked over several weeks, often using building materials contributed by local companies — all for Alice. She was both delighted with the transformation and flabbergasted by the fuss. As health issues and dementia progressed, Alice moved to the assisted living and memory care center in Lake Havasu City, where she spent the last years of her life. Alice is survived by her brother, William K. (Bill) Erb of Brooklyn, MI; four nieces, Peggy Erb Williford of Brighton, MI, Roseann Vorce of Ann Arbor, MI, Christine Vorce Zapinski of Pittsburgh, PA, and Darcy Erb Campbell of Dexter, MI; a nephew, Scott Erb of San Ramon, CA; 11 great nieces and nephews; and her guardian angels, Roland and Charna Walker of Lake Havasu City, AZ. Alice was preceded in death by her parents; her sister, Angele Merlon Erb Vorce; and two nieces, Donna Lee Erb and Martha Vorce Chandler. The Walkers and Alice’s family wish to extend their heartfelt gratitude to the Lake View Terrace staff for their loving care of Alice these past few years. Family members will gather for a memorial service this fall, with interment of her ashes in the family plot at Highland Cemetery, Brooklyn, MI.

The family of Alice Leola Erb created this Life Tributes page to make it easy to share your memories.

Send flowers to the Erb family.