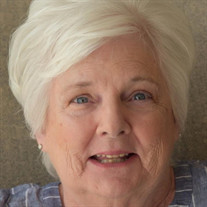 Barbara “Bobbi” Flinn, 73, passed away December 24, 2021. Bobbi’s family and friends will gather Thursday, January 6, 2022 from 5:30 p.m. – 7:30 p.m. at Eineder Funeral Homes - Brooklyn Chapel. Bobbi was born on May 5, 1948, in Wilmington, Delaware to Steve and Jane Nelson. In her twenties she was a flight attendant with TWA and always talked of that time with great fondness. It was her greatest title until she became Mom. Bobbi married John Flinn, on December 1, 1979, in Parkville, Missouri. She will be remembered as a loving wife, mother, grandmother and friend. Bobbi was devoted to her family and made them the center of her life. She enjoyed watching sports, especially the Detroit Tigers and the Dallas Cowboys and enjoyed spending time going out for meals and blessing her family and friends. Bobbi never needed a specific reason to bless others when she could. She believed that personally impacting others lives in a positive manner was the good this world needed. Her legacy is her family; her love was her family; her most blessed gifts were her family. Bobbi will be greatly missed by her husband, John; her children, Megan Flinn of Napoleon, MI; Colin (Tiffany) Flinn of Brooklyn, MI; Erin Flinn of Napoleon, MI and Siobhan (Tyler) Scheick of Portage, MI; siblings, Jan Melson of Canton, GA; Steve Nelson of Gladstone, MO; MaryJo (Mark) Schumacher of Almont, CO; and T.J. Nelson of Colorado Springs, CO; grandchildren Jordyn, Emmarie, Kinleigh, Teagan, Perry, Lochlan and Saylor; as well as many nieces and nephews. She was preceded in death by her parents and a brother, Robert Nelson. In lieu of flowers memorial contributions may be made to the family care of John Flinn for distribution into the memorial educational trust for her grandchildren. Please leave a message of comfort for Bobbi’s family or sign her guestbook at www.EinederFuneralHomes.com.

The family of Barbara "Bobbi" Flinn created this Life Tributes page to make it easy to share your memories.

Send flowers to the Flinn family.