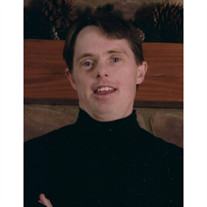 Brooks, Barry Allen Brooklyn/Jackson, Michigan His Legacy... Barry Allen Brooks, Age 52, passed away January 14, 2020. He was born April 26, 1967 in Pontiac, Michigan to Carlton and Sally (Freeland) Brooks. Barry was a student at St. Louis Center in Chelsea, High Point School in Ann Arbor and Sienna Heights University in Adrian. He worked at Giant Eagle supermarket in Avon Lake, Ohio for 16 years until his retirement in 2008. He and his parents lived at Washington Lake in Brooklyn for 10 years. They were all members of Brooklyn Presbyterian Church, where he was a volunteer helper for several years. He loved his family dearly and was a proud uncle and godfather. His Family... Barry will be missed by his parents Carl and Sally, siblings: Pamela Brooks of Shelby Township, MI; Brian (Carol) Brooks of Grandville, MI; Patricia [Douglas] Fries of Cleveland, OH and five nieces and nephews: John Fries of Cleveland, OH; Carissa Carpenter of Shelby Township, MI; Dana Fries of Sacramento, CA; Sara Brooks of Grandville, MI and Nathan Brooks (his Godson) of Grandville, MI. He was preceded in death by his loving grandparents. Barry has always had a very positive attitude and an amazing sense of humor. He enjoyed a large and diverse group of friends in every community in which he lived, including Avon Lake, OH, Brooklyn/Irish Hills and the staff and residents of John George Home in Jackson. He thoroughly enjoyed life, including dancing - having performed at the Down Syndrome Conference in Chicago - and Zumba at the Columbia High School Fitness Center, as well as bowling and participating in the Special Olympics. Barry was an inspiration to others through visualizing goals that he went on to achieve. Celebration of Life... Barry's family and friends will gather Saturday, January 18, 2020 for visitation from 10:00 am until noon at Brooklyn Presbyterian Church, 160 N. Main St., Brooklyn. Services will be at noon, with Rev. Dr. M. Jacob Kaufman as celebrant, followed by a luncheon in Fellowship Hall. Memorial contributions may be made to John George Home, 1501 E. Ganson St., Jackson 49202, or at www.johngeorgehome.com. Messages for Barry's family can be left at www.borekjennings.com.

The family of Barry Allen Brooks created this Life Tributes page to make it easy to share your memories.

Send flowers to the Brooks family.