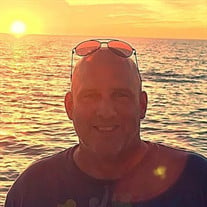 Brian Lee Miller, 52, of Jackson, passed away Friday, April 29, 2022 . A Celebration of Life for Brian will be held Thursday, May 12, 2022 from 5:00 pm – 7:00 pm at the American Legion, Wilber-Bartlett Post 315 (211 Chicago Street, Brooklyn, MI) He was born on September 30, 1969 in Jackson, Michigan to Vern and Vickie (Beer) Miller. Brian (referred to by many as “Miller”) attended Columbia Central Schools and enjoyed competing in wrestling and football. After Brian graduated in 1988, he worked alongside his father at Miller’s Cement Contracting and then switched careers to work fourteen years for Ford Motor Company in Saline. Brian was a high energy, fun, compassionate, kind-hearted, loving soul with an infectious laugh and smile. He enjoyed things that went fast, growing up riding dirt bikes, snowmobiles, boating and attending Street Rod car shows. He later went on to own a Harley Davidson and 1955 Chevy that he restored with his dad. In addition to all things fast, he enjoyed fishing, plants and time spent with his family and friends. Brian will be sadly missed by all who loved him. May he truly find rest and peace now. Brian is survived by his mother, Vickie Milosh; stepmother, Marlena (Marty) Miller; a half-sister Kristy (Matt) Babcock; Niece, Madisson Bates and Nephew, Zac Babcock. Also, he is survived by his Aunt Janet Hastings, Uncles, Bob (Laurie) Beer, Eddie (Cheryl) Beer and several cousins. He is preceded in death by his father, Vernon (Vern) Miller and stepfather, George Milosh. Memorial contributions are suggested to Andy’s Angels, 2324 Brooklyn Rd., Jackson, MI 49203. Please leave a message of comfort for Brian’s family or sign his guestbook at www.EinederFuneralHomes.com.

The family of Brian Lee Miller created this Life Tributes page to make it easy to share your memories.