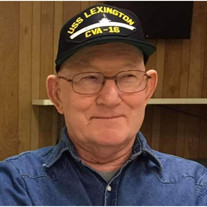 Boley, Charles Jack Brooklyn, Michigan   His Legacy... Charles Jack Boley, Age 82, passed away November 19, 2019.  He was born on January 16, 1937, in Quincy, Michigan to Charles and Ellenor (Stafford) Boley. Jack married the love of his life, Marjory Rufner, on October 31, 1970 in Brooklyn, Michigan.   Jack served honorably in the U.S. Navy for four years.  He was founder of Boley Well Drilling, was a partner of Fox & Boley Well Drilling and president of the Michigan Well Driller Association.  Jack also was a mechanic at Boley Brothers John Deere Tractor and Implement Store.  He loved all things John Deere collecting John Deere model airplanes as well as flying his own airplane.  Jack enjoyed mornings at the Napoleon Café drinking coffee with the other pilots and friends.   He was a Michigan State Spartan fan, an avid hunter with both bow and gun, and an avid fisherman during the summer and winter.  Jack loved to golf where he sponsored the Fox & Boley league for 31 years.  He also once drove school buses to Alaska to deliver to a school district.   He and his wife have been long time residents of Norvell where they raised their family of 8 plus. He appreciated the small things of life like sitting in his chair watching the humming birds at the feeders outside his window, watching westerns on TV, putting on an annual pig roast for family and friends and was most comfortable dressed in his wooden spoon shirt and a pair of blue jeans.    Jack loved spending time with his family above all and even found room in his heart to take in children who were having trouble at home.  He was a loving husband, father, grandfather and friend who will be missed by all who knew and loved him.      His Family...Jack will be missed by his wife Marjory; his children, Debra (Bruce) Boley-Foley, Charles (Susan) Boley, Donna (Don McLean) Burkholder, Kimberly (Greg) Culver, Tracy (Charity) Burkholder, Steven (Kim) Boley, Nancy (Jay Bertke) Harris, Karen (Tim) Farr, 21 grandchildren, 24 great grandchildren, sister Marjorie Phillips and brother Fred (Paula) Boley and many nieces and nephews. He is preceded in death by his parents, granddaughter Leeah Boley and brother Donald Boley.   His Farewell... Jack's family and friends will gather Monday, November 25, 2019 from 10:00 am until time of service at 11:00 am at Borek Jennings Funeral Home, Braun Chapel. Pastor Stephen Samonek will officiate.   Memorial contributions are suggested to the Wounded Warrior Project or Disabled Veterans of America.   Please leave a message of comfort for Jack's family at 1-877-231-7900, or sign his guestbook at www.borekjennings.com. .

The family of Charles Jack Boley created this Life Tributes page to make it easy to share your memories.

Send flowers to the Boley family.