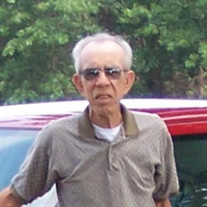 Fatherree, Charles Brooklyn, Michigan Charles Edward Fatherree,87, passed away May 5, 2020. Known to his friends as Charlie, he was born June 14, 1932 in Lockesburg, Arkansas to Frank and Viola (Brackett) Fatherree. After graduating early from high school, he joined the United States Navy where he served proudly during the Korean War. Following his discharge from the Navy, Charlie was in Michigan visiting one of his brothers, when a chance meeting introduced him to the love of his life Virginia Ploch. On March 5, 1956, twelve days after they met, Charlie and Virgina were married in Texarkana Texas. Returning to Michigan, Charlie found work as a crane operator and soon found his skills in demand to set structural steel for many prominent buildings in the greater Detroit area. After settling in Brooklyn, Charlie put his woodworking skills to use building various items. Most were for his home, but if a friend or family member wanted something, and “wasn't in too big a hurry to get it” he would gladly build it, and over the years produced a variety of cutting boards, rolling pins, and even ironing boards that found their way into the homes of friends and family members. Charlie made annual trips south for family gatherings, and would often visit whatever part of the country his son happened to be in. Charlie is survived by his son Curtis Fatherree of Brooklyn; his sister Shirley Hatch and brother Kenneth Fatherree, both of Arkansas; and numerous nieces and nephews. He is preceded in death by his parents, his wife Virginia, four brothers and one sister. Charlie's family held a private viewing at Eineder's Borek Jennings Funeral Home, Brooklyn Chapel. It is the family's request that any memorial contributions be made to a charitable organization. Please leave a message of comfort for Charle's family or sign his guestbook at www.einederfuneralhomes.com.

Fatherree, Charles Brooklyn, Michigan Charles Edward Fatherree,87, passed away May 5, 2020. Known to his friends as Charlie, he was born June 14, 1932 in Lockesburg, Arkansas to Frank and Viola (Brackett) Fatherree. After graduating early from... View Obituary & Service Information

The family of Charles Edward Fatherree created this Life Tributes page to make it easy to share your memories.

Send flowers to the Fatherree family.