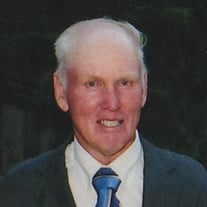 Charles Ronald (Ron) Kuhl Manchester, Michigan Ron Kuhl, 81, an area Manchester farmer, passed away at the Kuhl Family Homestead, on July 16, 2020. Ron was the fourth-generation to operate the farm that has been in the family since 1873. Farming was Ron’s life and career starting at the age of ten years old to help with chores, milking and driving a team of horses. Ron was born on February 21, 1939 at the farm and remained in the home for the rest of his life. He was the son of the late Charles F. and Alta K. Kuhl. His elementary education included attending Rowes Corners School which is adjacent to the farm and was purchased by Ron to be a part of its property many years later. Ron graduated from Manchester High School with the class of 1957. He attended Michigan State University for a variety of short course agricultural studies. During the winter months he did sheep shearing in the Washtenaw County area for many years to come. Ron is survived by his two sisters, Janet A. Kuhl and Donna A. (Kuhl) Newgord and brother-in-law Noel Newgord, all of Racine, Wisconsin. He has two nephews, Gary E. (Kelly) Newgord of Austin, TX and Kurt M. Newgord of Racine, WI. His great nephews and niece include Marlo, Odin and Soren Newgord. Ron is survived by many relatives, long-time farming friend Michael Hall, a long list of farming friends and acquaintances from the area and beyond. In later life, after the sale of the dairy cattle, Ron enjoyed traveling to Australia and New Zealand during which time he developed a group of friends that annually gathered at their area Midwest farms to share their farms and local interests. His travels included Alaska, Hawaii, Europe, China, Russia and areas of Central and South America; picking up friends along the way. Community Involvement was also part of his life as a 4-H member, leader and supporter for many years, helping with the Manchester Chicken Broil, Barn Quilts Committee, Manchester Fair, continuing his interest in Historic Barn Restoration and other community events. He was a Michigan state sheep shearing champion and Farm Bureau member. Ron has requested that no funeral will be held. A Celebration of Life will be hosted at a later date due to the COVID-19 directives. Memorial contributions are suggested to St. Jude Children's Research Hospital or the Ronald McDonald House. Funeral arrangements will be handled by the Eineder Funeral Home of Manchester. Please leave your messages of condolence to www.einederfuneralhomes.com.

Charles Ronald (Ron) Kuhl Manchester, Michigan Ron Kuhl, 81, an area Manchester farmer, passed away at the Kuhl Family Homestead, on July 16, 2020. Ron was the fourth-generation to operate the farm that has been in the family since 1873.... View Obituary & Service Information

The family of Charles "Ron" Kuhl created this Life Tributes page to make it easy to share your memories.

Send flowers to the Kuhl family.