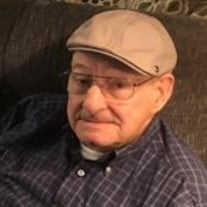 Chester W. Southwell Chester Ward Southwell peacefully passed away at home on Feb.1., 2021 at the age of 86. He was born on Nov. 4, 1934 in Adrian, Mi., the son of Ward and Goldie (Grubbs) Southwell. Chet was drafted into the Army at the age of twenty and was stationed in Germany where he served until 1957. After returning home from his military service, he became a lifetime member of the American Legion. Chet married Anita Mapes from Onsted, Mi. on Aug. 29, 1958 and they remained there until she preceded him in death on Jan.9, 1988. Through thirty years of marriage, they built a life of raising children, working, traveling and bringing together many friends and family. He is survived by his five children; Debra (Tim) Gorman of Bakersfield,CA. Bruce(Gabrielle) Southwell of Toledo, OH., Cynthia Chambers of Toledo, Oh., Connie Southwell of Na’alehu, Hawaii and Grant (Trish) Southwell of Bakersfield, CA. Six Grandchildren; Meghan Gorman, Elijah And Zachary Chambers, Sara, Garrett and Kyle Feliz. In 1991 he married Gordene Anderson and she survives him along with her children; Lonny (Cheryl) Hartman, Dadene (Paul) Burke, Gordy (Jo) Hartman, Loretta Jo Hartman, Corky (Lori) Anderson, eight grandchildren and four great grandchildren; Chet had 5 brothers; Larry Southwell and David Southwell both of Gilletts Lake, Mi. Dean (Myra) Southwell of Norvell, Mi. And he is preceded in death by his parents and brothers Richard Southwell of Grass Lake, Mi. and Frank Southwell of Florida and one sister Patricia Todd of Brooklyn, Mi. He is survived by many nieces and nephews as well. Chet was a skilled tradesman for Ford Motor Company for thirty years during which time he received accolades and awards for suggestions and innovations that he made to their production line processes. He retired in 1991 and along with Gordene moved to Darby, Mt. He spent his retirement years working on his dream log home, hunting and fishing and spending time with his beloved dog Rudy Pierre. Chet was a prolific hunter and throughout the years he acquired many trophy animals. In December 2004 he captured a record sized Shiras moose that was entered into the 2004 - 06 Boone and Crockett Club Big Game Awards. He returned to Michigan in his latter years where he resided in Tecumseh. During this time, he obtained his dream automobile, a 1932 Packard Dual Cowl Super 8 Phaeton which he restored to its full glory. The completed car was exhibited at the 2017 Lake Bluff Concours d’ Elegance where it won Best in Show and the People’s Choice awards. Chet had a great zest for life and would always share many wonderful stories of his adventures. A visionary man with many extraordinary talents, he was an adept builder, carpenter, mechanic and machinist. Chet was a true example of the American Dream. He will always be remembered for showing that through hard work and determination you can achieve any of your goals and aspirations. He will be greatly missed by his children, family and friends and remembered fondly for his many accomplishments and the inspiring way in which he lived. Chet’s family and friends will gather on Friday, February 5, 2021 at Eineder Funeral Homes – Brooklyn Chapel (137 S. Main St. Brooklyn, MI 49230) from 4PM-8PM. A private funeral will be held for family and friends. Pastor Jeff Sheeks of the First Baptist Church of Brooklyn to officiate. Burial to follow at Maple Shade Cemetery, Onsted, Michigan. Covid-19 mandates will be observed, masks and social distancing is required. In lieu of flowers, memorial suggestion is to Arbor Hospice or the Onsted American Legion. Please leave a message of comfort for Chet’s family or sign his guestbook at www.EinederFuneralHomes.com.

Chester W. Southwell Chester Ward Southwell peacefully passed away at home on Feb.1., 2021 at the age of 86. He was born on Nov. 4, 1934 in Adrian, Mi., the son of Ward and Goldie (Grubbs) Southwell. Chet was drafted into the Army at the age... View Obituary & Service Information

The family of Chester Ward Southwell created this Life Tributes page to make it easy to share your memories.

Send flowers to the Southwell family.