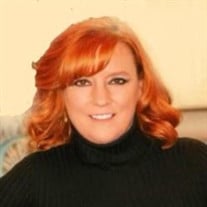 Curley, Colleen Onsted, MI Colleen Suzanne Curley, age 53, of Onsted, passed away at Promedica Hospital in Adrian, on Sunday, January 10, 2021. A Mass of Christian Burial will be held at 3:30 PM on Friday, January 15, 2021 at St. Mary Roman Catholic Church (210 West Main Street, Manchester, MI 48158), Fr. Bosco Padamattummal will serve as celebrant. A public visitation will begin at 2:30 PM until the time of Mass. Covid-19 Mandates will be observed, facemasks and social distancing will be required. Colleen was born October 28, 1967 in Ann Arbor, MI to William and Mary “Jean” (Vogel) Riley. She was a proud 1985 alumni of Manchester High School. She married the love of her life Robert “Bob” J. Curley on July 26, 1985 at St. Mary Roman Catholic Church in Manchester. Colleen was a very active person that was full of love, energy and was known for sunbathing by the pool and reading a new cookbook. She had soft and compassionate side, and side of her that could be as tough as nails. All these attributes contributed to her success in her personal and professional life. Her family was her greatest love, she was very proud of her husband and children. She loved to travel both near and abroad, traveling to such places as Milan, Italy and Vienna, Austria; where she attended cooking classes to learn the styles and techniques of the local cuisine. Colleen was a very talented Chef, owning and operating: “Cuisine with Colleen”, for the last 8yrs, being featured in the local newspapers, as well as catering such events as the Brooklyn Irish Hills Chamber of Commerce’s “Taste of the Hills” and for the Jackson Symphony Orchestra’s Fundraiser Dinners. Prior to being a full-time private chef, she worked for 10 years as the Schedule Coordinator for the Lenawee County Medical Care Center in Adrian, after the Care Center she then worked for 10 years in Human Resources for Amcor of Manchester. Colleen was an active member of St. Mary Church in Manchester, St. Joseph Shrine Church in Brooklyn, Irish Hills Chamber of Commerce and the Women of the Moose, Lodge # 2314. Colleen is survived by her devoted husband of the 35 years, Bob; her loving children, Robert Curley Jr. of Tullahoma, TN and Kaitlyn (Aaron Parks) Curley of Manchester, MI; her mom, Jean Riley of Manchester; her mother-in-law, Victoria Curley of Manchester; her sister, Kari (Mark) Ball of Manchester; her brothers, Will Riley of Manchester; Toby (Michelle) Riley of St. Joseph, MI and many nieces and nephews. She is preceded in death by her father, William Riley; her father-in-law, James Curley and her grandparents. In lieu of flowers memorial contributions may be directed to the Onsted Foundation for “Cuisine with Colleen”, a Scholarship fund that has been established for those that have an interest in the Culinary Arts. Please leave a message of comfort for Colleen’s family or sign her guestbook at www.EinederFuneralHomes.com

The family of Colleen Suzanne (nee Riley) Curley created this Life Tributes page to make it easy to share your memories.

Send flowers to the Curley family.