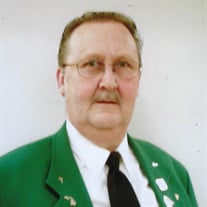 Dennis Michael Almond, 79, of Brooklyn passed away Thursday, February 3, 2022 at Henry Ford Allegiance Hospital, Jackson after a lengthy battle with Lung Disease. Mike’s family and friends will gather Friday, February 11, 2022 from 10:00 am – 12:00 pm at Eineder Funeral Homes - Brooklyn Chapel, with his funeral service to follow at 12:00 pm. Rev. Deacon Winnie Cook from St. Michaels and all Angels Episcopal Church of Cambridge Junction will officiate. He was born on January 29, 1943, in Acushnet, Massachusetts to James and Addie (Brightman) Almond. Mike married the love of his life, Elizabeth Price, on October 6, 1962, in New Bedford, Massachusetts. He will be remembered for his endless commitment to the Fraternal Order of Eagles. Mike was a loving husband, father, grandfather and friend to all. He had a terrific sense of humor and enjoyed singing George Jones songs. His favorite past times were fishing, eating pastry and donuts. He traveled throughout the United States for the Fraternal Order of Eagles. Mike was a past regional President and past State Aerie President for the Eagles as well, giving over 30 years of his time. He was also a member of the Brooklyn Moose Lodge 2651 and the Irish Hills Eagles 3689. Mike retired from Motorwheel in Ypsilanti. Mike is survived by his loving wife of nearly 60 years, Elizabeth; his children, Eugene (Rhonda) Almond, Addie Jane Almond, Antionnette “Toni” (Jason) Kettner; siblings, Betty Nunus, Roberta (Ray) Perry, Judy Almond and Arthur Almond; seven grandchildren; Fur grandchildren, Panda, Sophia Petrillo, Hara and Betty White; many great grandchildren; and many nieces and nephews. He is preceded in death by his parents, eight siblings and a nephew, Bruce Perry. Memorial contributions may be given to family for future designation. Please leave a message of comfort for Mike’s family or sign his guestbook at www.EinederFuneralHomes.com.

The family of Dennis "Mike" Almond created this Life Tributes page to make it easy to share your memories.

Send flowers to the Almond family.