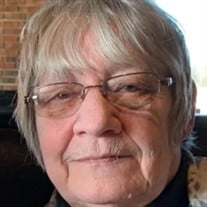 Dianne Carole Porterfield, 70, passed away Wednesday, August 18, 2021. Dianne’s family will hold a private gathering and service at Eineder Funeral Homes - Brooklyn Chapel. Interment to follow at Hillcrest Memorial Park, Michigan Center. Deacon Chris Vida, of St. Rita Catholic Church will serve as celebrant. She is the daughter of Lyle Beck and Carolyn Pierce, was born September 6, 1950. She grew up and went to school in Michigan Center. Soon after graduating from MCHS in 1968. She met William Bailey of Munith. He was on leave from Vietnam, and they were married upon his return. Together they had three children. Dianne is survived by her daughter Teresa Lynne (Todd) Rubert of Michigan Center, son Chad (Heather) Effort Bailey of Knoxville, TN.; her grandchildren Tifaney, Logan, Brennan and Allison; sister, Christy (Joe) Smith. She is preceded in death by her husband, Gil Porterfield; son William “Billy” Charles Bailey; brother, Ronald Beck and nephew, Christopher David Bailey. Dianne worked several years at the “Stop & Shop” across from the MC Boat launch. She was a friendly face to many in the community. Dianne enjoyed chatting with folks who stopped by for a quick lunch, kids walking to school and even the kids skipping class to drop a few quarters in the arcade out back. Later, Dianne moved to the Brooklyn area, where she worked at the Country Market until retiring in 2017. She was a member of the Irish Hills Fraternal Order of Eagles, where she enjoyed socializing and helping to organize special events and holiday dinners. At the Fraternal Order of Eagles, she met Gilbert “Gil” Porterfield. They were married 2010 and remained so until his death in 2014. Memorial contributions are suggested to the American Cancer Society. Please leave a message of comfort for Dianne’s family or sign her guestbook at www.EinederFuneralHomes.com.

The family of Dianne Carole Porterfield created this Life Tributes page to make it easy to share your memories.

Send flowers to the Porterfield family.