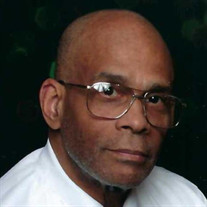 Don Carl Christian, Sr., 75, passed away peacefully at home, Tuesday, April 13, 2021. Don’s family and friends will gather Friday, April 16, 2021 from 10:00 am – 11:00 am, at St. Mary Roman Catholic Church, Manchester. His Mass of Christian burial will follow at 11:00 am. Fr. Bosco Padamattummal will serve as celebrant. He was born on July 22, 1945, in Detroit, Michigan to Wyatt and Dorothy (Hannekin) Christian. Don married, Karen Bonkowski, on November 15, 1995, in Pleasant Ridge, Michigan. He will be remembered as being fun loving, having a great sense of humor and very well-liked by everyone. Don did have his strong willed side, that was very opinionated and he was never afraid to speak his mind. He was quite the outdoorsman, enjoying hunting and fishing with his family. The family had yearly gatherings which, meant a lot to him. Don proudly served his country in the United States Navy, 1964 - 1968. He loved to cook and take care of the farm animals. Don was very kind hearted and had a special fondness for his dogs, Sasha, Lucky and Baxter, who stayed by his side until the end. Don is survived by his wife, of 24 years, Karen; his children, Wyatt Christian and Kristina (Chris) Jenkins; grandchildren Christopher and Christian Jenkins, several other grandchildren and great grandchildren; his in-laws, Geraldine and David Bonkowski, brother –in – laws, Andrew and David Bonkowski and a nephew, Shaun. He is preceded in death by his parents, and a son, Don Christian, Jr. Memorial contributions are suggested to the American Cancer Society. Please leave a message of comfort for Don’s family or sign his guestbook at www.EinederFuneralHomes.com.

The family of Don Carl Christian Sr created this Life Tributes page to make it easy to share your memories.

Send flowers to the Christian family.