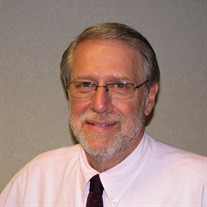 Ernest Keith Spycher, age 70, passed on January 1, 2021 after a short battle with non-alcoholic liver disease and liver cancer. Keith was born in Saginaw, MI on December 15, 1950 and was the only child of Ernest and Frances (Warner). He moved several times as a child living in St. Charles, Jackson, and Ithaca, MI. He graduated from Ithaca High School in 1969. Keith received a bachelor’s degree in Business Administration and Journalism from Central Michigan University in 1973. At CMU, Keith was a member of Alpha Kappa Psi fraternity. It was also at CMU where he met his wife of 46 years, Linda (Davey) Spycher, a social studies teacher at Mt. Pleasant High School. The couple married on August 10, 1974. Keith was a man of dedication and service. For decades he worked as a banker at Isabella Bank and Trust and actively participated in the community life of Mt. Pleasant. He served on the Housing Commission, the Planning Commission, the Zoning Board of Appeals, the City Commission, including as Vice-Mayor, and chaired the board of Listening Ear. He was a member of the Lions Club, served as the Club Treasurer, and completed two terms as King Lion. The Chamber of Commerce honored his service with the Eagle Award. After retiring, Keith and Linda relocated to the family cottage in Brooklyn, MI. Keith was a man of faith and a long-time member of Immanuel Lutheran Church. After moving to Brooklyn, he joined Brooklyn Presbyterian Church and was ordained as a deacon. In his spare time, he enjoyed home improvement, antiquing, reading, listening to music, traveling, and spending time with friends and family. Keith is survived by his wife, their two adult children, and one granddaughter: Ernest of Avon, OH is a retired Army Sargent and father to Brooklynn, age nine; Jacqueline of Southfield, MI is the Senior Pastor of First Presbyterian Church of Northville. He is also survived by his mother-in-law, Vera Davey of Brooklyn, MI, and numerous nieces, nephews, and extended relatives. A private burial service will take place at Riverside Cemetery in Mt. Pleasant. A public memorial is being planned for the summer. Memorial contributions may be given to Immanuel Lutheran Church or Brooklyn Presbyterian Church. Please leave a message of comfort for Keith’s family or sign his guestbook at www.EinederFuneralHomes.com.

Ernest Keith Spycher, age 70, passed on January 1, 2021 after a short battle with non-alcoholic liver disease and liver cancer. Keith was born in Saginaw, MI on December 15, 1950 and was the only child of Ernest and Frances (Warner). He moved... View Obituary & Service Information

The family of Ernest "Keith" Spycher created this Life Tributes page to make it easy to share your memories.

Send flowers to the Spycher family.