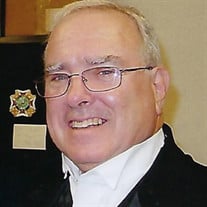 Eugene N. “Sonny” Liedel, 82, of Manchester passed away on Friday, August 7, 2020 in Ann Arbor. Born on August 23, 1937, in Monroe, he was the son of Eugene Carl and Ruth Hester (Morey) Liedel. On February 9, 1963, he was united in marriage to Flora Ann Brewer. Eugene served his country as an electrician in the United States Navy, and was a proud member of the Ann Arbor VFW, where he was past Commander Quartermaster for 13 years, Manchester American Legion and Washtenaw County Honor Guard. Following his retirement from the Navy, Eugene continued his work as an electrician with Ford Motor Company. He also served as a Scout Executive for Boy Scouts of America and was very active in the Manchester Sportsman Club. Eugene enjoyed camping all over the United States and wintering in Florida. Above all, he loved spending time with his grandchildren. Surviving are his wife, Flora Ann Liedel; one son, Eugene Carl (Nancy) Liedel, II; two daughters, Regina Marie Liedel and Cynthia A. (Ryan) Schoeneman; two sisters, Sheila (Lee) Reichenberger and Sue (Ken) DeVee; 6 grandchildren, Eugene Carl, III, Zachery, Herne and Gerald Liedel, and Reese and Logan Schoeneman; and many nieces, nephews and cousins. He was preceded in death by his parents, one sister, Sherry Kish, and one grandson, Ben Liedel. Funeral services will be held at Eineder Funeral Home – Manchester Chapel (207 East Duncan St., Manchester, MI 48158) on Wednesday, August 12, 2020 at 12PM. Prior to the service, a senior only gathering from 10AM -11AM and public gathering from 11AM-12PM. Inurnment will be at Great Lakes National Cemetery in Holly, Michigan. Memorial contributions may be given to Elizabeth’s Voice, 214 South View Dr.- Weatherford, TX 76087 (817-999-4799). Please leave a message of comfort for Eugene’s family or sign his guest book at www.EinederFuneralHomes.com.

The family of Eugene "Sonny" Liedel created this Life Tributes page to make it easy to share your memories.

Send flowers to the Liedel family.