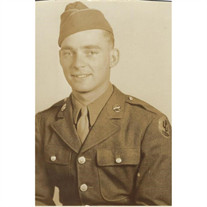 Guernsey, Jr., Harvey "Jim" Cement City, Michigan   His Legacy... Harvey James Guernsey, Jr., Age 97, passed away December 15, 2019.  He was born on October 1, 1922, in Jefferson, Michigan to Harvey and Lizzie (Henmen) Guernsey, Sr.  Jim married the love of his life, Elva Brown, on June 16, 1943, in Brooklyn, Michigan.  As a young boy, Jim was not a fan of going to school and would go trapping in the marshy creek area which eventually became Lake Columbia, then worked as an ice cream maker at McGriff's Ice Cream Factory.  Jim then went on to serve honorably in the U.S. Army during WW II as a sharpshooter during battles in Rome-Arno and was a recipient of a bronze star.  After the service, Jim worked for Ford Motor Company in Brooklyn before being transferred to Saline where he worked for over 30 years.  When not at the plant, Jim liked to farm, do roofing and was known to have made 45 picnic tables for a camp ground owner just to be helpful.   He also paid for a well for a family who had no water.  He was a member of the American Legion Wilber-Bartlett Post #315 in Brooklyn.  Jim loved watching the Detroit Tigers and the news.    He will be remembered as a kind hearted person who was a "little rough" around the edges.  He will be missed by all who knew and loved him.   His Family... Jim will be missed by his children, Mike Guernsey, Sharon (Dusty) Kelley, Steve (Karen) Guernsey, 10 grandchildren, 16 great-grandchildren and one great-great grandson, a sister Luetta Stager, two brothers Donald (Carol) and Ken (Wilma) Guernsey.   He is preceded in death by his parents, wife Elva, sister, Darlene, a brother Robert and daughter in-law Mary Ann Guernsey,   His Farewell... Jim's family and friends will gather Thursday, December 19, 2019 from 4:00 pm until 8:00 pm at Borek Jennings Funeral Home, Braun Chapel in Brooklyn where his Community Farewell will be held on Friday, December 20, 2019 at 11:00 am.  Family and friends will gather from 10:00 am until time of service.  Pastor Ned Bernstein will officiate with burial following at Jefferson Cemetery. In lieu of flowers, memorial contributions are suggested to Elara Caring Hospice or St. Jude's Children Research.  Please leave a message of comfort for Jim's family at 1-877-231-7900, or sign his guestbook at www.borekjennings.com.

The family of Harvey "Jim" Guernsey, Jr. created this Life Tributes page to make it easy to share your memories.