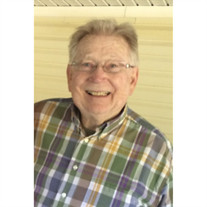 Hessling, Herman John Levering, Michigan His Legacy... Herman Hessling, 84, passed away January 17, 2020.  He was born on November 20, 1935 in Detroit, Michigan to Herman Joseph Hessling and Gertruda (Elsmann) Hessling.  Herman married the love of his life, Christine Kogowski, on October 8, 1955 in Detroit, Michigan.  He will be remembered as someone who was proud of his German heritage and showed it in his love of German food, traditions, and history.  Herman was a skilled tradesman and held a position with Ford Motor Company as a skilled painter.  Following retirement Herman and Christine moved Up North and lived in Bliss, Michigan.  He was one of the founding members of the Companions of Christ the Lamb in Paradise, Michigan.  He was instrumental in the establishment and building of the church.  Herman was a very social person and enjoyed hosting many parties.  He was well known for telling stories that captivated his family and guests.  Herman was a proud family man, always well dressed, and loved their many family dogs.  His Family... Herman will be missed by his children, Julie (Hessling) De Lucia, Garret Hessling,  and Sheri (Hessling) Marotz;  his grandchildren, Michael Dominic De Lucia, Bridget (De Lucia) Wilson, Chantael Hessling, Katherine Hessling, Timothy Kangas,  Cody Kangas, Thomas Kangas, Mason Kangas, Maria Hessling, Tucker Hessling, Christian Marotz, Zachary Marotz, and Meghan Marotz; his great grandchildren Jaden Wilson, Lucia Wilson, Aurora Wilson, Arianna De Lucia, and Alexa Hessling;  his brother-in-law Gary (Cindy) Kogowski and his  loving nieces and nephews. He is preceded in death by his wife and best friend, Christine. His Farewell... Herman's family and friends will gather on Tuesday, January 21, 2020 and Wednesday, January 22, 2020 from 2:00 pm until 8:00 pm (7:00 pm scripture service) on Wednesday at Borek Jennings Funeral Home, Manchester Chapel. Mass of Christian Burial will be held at St. Mary Roman Catholic Church in Manchester, MI on Thursday, January 23 with an 11:00 am Mass (10:00 am gathering} with Servants of Charity serving as Celebrant. Memorial contributions may be made to St. Jude Children's Hospital or St. Labre Indian School.  Please leave a message of comfort for Herman's family at 1-877-231-7900, or sign his guestbook at www.borekjennings.com.

The family of Herman John Hessling created this Life Tributes page to make it easy to share your memories.

Send flowers to the Hessling family.