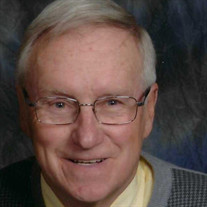 Jack Thomas Lockridge, 80, of Manchester, MI passed away peacefully, October 30, 2021, at his home after a battle with brain cancer, with his loving family by his side. Jack’s family and friends will gather Wednesday, November 3, 2021 from 5:00 pm – 8:00 pm at Eineder Funeral Homes- Manchester Chapel and Thursday, November 4, 2021 from 10:00 am – 11:00 am with the funeral service at 11:00 am at the Emanuel Church of Christ (324. W. Main St) Manchester, MI. Pastor Chris Kurtz will serve as celebrant. The Burial of Ashes to follow, Oak Grove Cemetery, Manchester. He was born December 27, 1940, at Highland Park Hospital in Highland Park, MI. He married the love of his life of 56 years, Diane Esther (Grossman) Lockridge, on August 21, 1965, at Emanuel United Church of Christ in Manchester, MI. Jack graduated from Manchester High School in 1958. After graduation, he served in the United States Navy for 1959-1963 where he was stationed on the USS Forrestal CVA 59 Air craft carrier and served over in the Mediterranean Sea with Cannes, France as his home port. He visited Spain, Italy, Greece, Lebanon and Turkey. Jack was also stationed on the carrier in Cuba during the Bay of Pigs. After the Navy, he was employed by the University of Michigan Elevator Department of which he retired from in 2002. He was a member and deacon of Emanuel United Church of Christ and a Manchester Senior Center Volunteer. Retirement was fun for Jack. It allowed for him to make time for fishing, driving dune buggy’s on Sand Dunes, watch Nascar, writing in his diary, biking, going up north with his best friend, Dave and working on cars. Jack loved going to McDonalds and getting a coffee and a roll. He was a master “MacGyver” and could make anything out of a little of this and a little of that and duct tape. Jack enjoyed Adult Coloring and he framed many of his colorings and gave them to other people to enjoy. He enjoyed talking to new people and was always first to make one feel welcomed. Storytelling was one of his favorite things to do, and he was never at a loss for words. Jack enjoyed family holidays. Before each meal, he hand wrote prayers and put them under everyone’s plate. When it was finally time to feast, each family member would look under their plate, pick up their portion of the prayer and wait for their turn to read the moments of reflection and blessings. We always said he should have been a pastor. When grandchildren came, it was all about them. Jack would take them to his favorite McDonalds and they would grab a snack together. He worked on five lawnmowers, so each one of them could ride them around his yard. Jack never missed a school event or an athletic game. He made books that held special moments in each of their lives and those books were given to each of them at their high school graduations. Jack was a proud grandpa. He enjoyed learning about their friends, which then became part of his family. Jack is survived by his wife, Diane; his son, Thomas (Paula) Lockridge and his daughter, Kimberly (Jesse) Otto; five grandchildren, Nathan, Brett and Anna Lockridge; and Paige and Connor Otto; two nieces and several cousins. He is preceded in death by his parents, Thomas and Lillian (Fox) and his sister and brother-in-law, Judy and Jack Wriska. Memorial contributions are suggested to Emanuel United Church of Christ or Arbor Hospice. Please leave a message of comfort for Jack’s family or sign his guestbook at www.EinederFuneralHomes.com.

Jack Thomas Lockridge, 80, of Manchester, MI passed away peacefully, October 30, 2021, at his home after a battle with brain cancer, with his loving family by his side. Jack&#8217;s family and friends will gather Wednesday, November 3, 2021... View Obituary & Service Information

The family of Jack Thomas Lockridge created this Life Tributes page to make it easy to share your memories.

Send flowers to the Lockridge family.