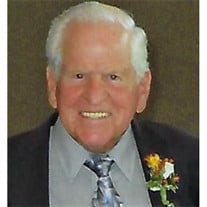 Baker, James Luther Jr. Brooklyn, Michigan   His Legacy... James Luther Baker, Jr., 92, passed away March 11, 2020.  He was born on December 13, 1927, in Knoxville, Tennessee to James Luther and Willie Ann (Dodson)Baker. Jim married the love of his life, Geneva Trent, on December 18, 1954, in Detroit, Michigan.   He will be remembered as a very active man that loved to hunt with his friends, play softball, bowl and golf three times a week. Jim proudly served his country in the United States Army during the Korean Conflict. He retired from Ford after 27 years and was a member of the UAW Local 182 in Livonia.  Jim attended the Napoleon United Methodist Church and was a member of the Masonic Lodge, Garden City, while also attending the Brooklyn and Napoleon Lodges. He was known as being a genuine man.  He will be missed by all who knew and loved him.   His Family... Jim will be missed by his wife Geneva; his children, Karen Sheldon, of Cedar Springs, MI, Pam (Robert) Whitlock of Canton, MI; a sister Juanita Salvator; two grandchildren Erin (Dave) Cairy and Blair (Nicole) Shellenbarger; four great grandchildren Jack, Liam, Jenna and Isaac; many nieces and nephews. He is preceded in death by his parents, brothers, Melvin, Don and Charles.   His Farewell... Jim's family and friends will gather Monday, March 16, 2020 from 4:00 pm -8:00 pm, with a Masonic service taking place at 6:30 pm. His Farewell will be held on Tuesday, March 17, 2020 at 11:00 am at Borek Jennings Funeral Home; Braun Chapel in Brooklyn, gathering to begin at 10:00 am. Pastor Mary Sweet to officiate. Burial to follow at Hillcrest Memorial Park. In lieu of flowers memorial contributions are suggested to Shriner's Children Hospital or Wounded Warrior Project.  Please leave a message of comfort for Jim's family at 1-877-231-7900, or sign his guestbook at www.borekjennings.com. om.

The family of James Luther Baker, Jr. created this Life Tributes page to make it easy to share your memories.