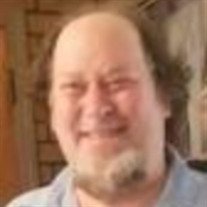 Jim Garrison Onsted James Alan "Jim" Garrison, 59, of Onsted, passed away peacefully December 20, 2020, surrounded by his loving family at the Promedica Charles and Virginia Hickman Hospital, Adrian. Jim was a talented musician who enjoyed life and lived it to the fullest. An accomplished bass guitarist, Jim could play virtually any instrument by ear and often could be found strumming along with songs on the radio or television when he wasn't collecting antiques and old records. Jim cut his musical teeth with bands such as Ripper and Bob and the Wiltones in his early years, and was a familiar face at local venues in Brooklyn, Jackson, and the Irish Hills. He was a 1979 graduate of Napoleon High School, where he distinguished himself in drama and in woodworking. Always the man behind the camera, Jim will be remembered for his crazy sense of humor, which he often employed to lift the spirits of family and friends. His Coney sauce was unparalleled and his "go-to" for family dinners and gatherings alike. Many will remember Jim from his years at Miller Automotive in Jackson, later L&A Automotive, or from Inter-Lakes Market, where he was a meat-cutter for several years, a job he truly enjoyed. Jim also loved animals of all kinds, particularly cats. The neighborhood menagerie of wildlife will miss his kindness. Jim was a person who "loved hard," a trait his family will treasure along with his sense of humor and imagination. He will be dearly missed. Jim was born June 20, 1961 in Jackson to William Alan and Judith (Guisinger) Garrison. On February 22, 1993, he married Kristin Lapham in Jackson and she survives. Jim was the proud father of Dustin (Chelsea) and Tiffany (Andy) Newman, all of Jackson; Ginger (Todd) Warner of Napoleon; and Aubrey Garrison and Sam Garrison of Onsted; six grandchildren, Riley Garrison, Aidan and Kime Warner, Lilly Turner, and Everett and Emberlyn Newman; Sabrina Garrison of Grand Rapids; his mother, Judith Wallace of Jackson; a sister, Shirley Rockey, and several nieces and nephews. He was preceded in death by his father and his stepfather, Ron Wallace. Cremation has taken place. The family will welcome friends at the Eineder Funeral Home, 137 S. Main Street, in Brooklyn on Wednesday, Dec. 23, from 11 a.m. to 1 p.m. A private service for family will follow with Rev. Mike Strange officiating. Covid mandates for masking and social distancing will be strictly followed at the funeral home. Contributions in Jim's memory may be made to Hidden Lake Gardens.

The family of James “Jim” Garrison created this Life Tributes page to make it easy to share your memories.

Send flowers to the Garrison family.