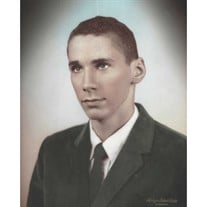 James R. Groves James Reynold Groves was born March 3, 1950 in Flint, Michigan and passed away December 29, 2019 at the age of 69. Jim was the son of James and Dolores Groves, the middle sibling between older sister Marilyn and younger sister Allison. While growing up he was smart and funny, and got into some crazy antics, much to the chagrin of our parents. Jim began showing some signs of mental illness in his late teens and was diagnosed with paranoid schizophrenia in his early 20's, but he managed to finish high school and college. He worked for a short time as an art teacher, but his disease made it too difficult for him to hold down a steady job. However, he began his lifelong love of wandering the country, somehow managing to always land on his feet. Our mother passed in 1974, our sister Allison (Manning) in 1983, and our dad in 1984. Jim and I saw each other frequently once he decided to call Michigan his home again and moved to a group home in the Monroe area. Although he struggled with his illness, he bounced back time and time again. It was as though nothing could destroy his spirit. Recently, however, his health began to decline, and he passed away after a 3-month illness. Our family would like to thank the kind and compassionate staff at Monroe Community Mental Health Authority, his dedicated case worker, and all the caring people at Select Specialty Hospital and St. Joseph Mercy Hospital in Ann Arbor. In addition to his sister Marilyn Groves Royle, he leaves behind his brothers-in -law, Jeff Royle and Robert Manning, nieces Stacey Maynard and Jennifer White, M.D., nephew Noel Manning, and great nieces Lindsey Maynard and Madison Maynard. Jim, I'll miss your sense of humor, the stories we shared about our parents and our childhood, and all the tales of your great adventures as you wandered the country. But now at last, all your demons are behind you and I know you're in a better place. You will always be in my heart. A memorial service remembering Jim will be held later in the year. Donations in Jim's memory can be made to the Humane Society of Huron Valley, Ann Arbor, MI or SASHA Farm Animal Sanctuary, Manchester, Michigan.

James R. Groves James Reynold Groves was born March 3, 1950 in Flint, Michigan and passed away December 29, 2019 at the age of 69. Jim was the son of James and Dolores Groves, the middle sibling between older sister Marilyn and younger sister... View Obituary & Service Information

The family of James Reynold Groves created this Life Tributes page to make it easy to share your memories.

Send flowers to the Groves family.