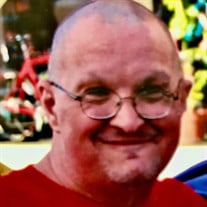 Jeffrey Alden Cooper, 53, passed away Tuesday, September 21, 2021, at Promedica Charles & Virginia Hickman Hospital, Adrian. Jeff’s family and friends will gather Friday, September 24, 2021, from 9:00 am – 11:00 am at Eineder Funeral Homes - Brooklyn Chapel. His funeral service will follow at 11:00 am. The burial of ashes will take place at Maple Shade Cemetery, Onsted. A special thank you to Hospice of Lenawee for everything they did for Jeffrey in his time of need. He was born on March 15, 1968, in Jackson, Michigan to Aldan and Esther (Howard) Cooper. He lived his entire life in Jackson County. Jeff graduated from Columbia Central High School in 1987. He loved animals, enjoyed eating out and traveling. Jeff always admired law enforcement. He loved to attend Toy Collectible Shows and he attended the Jackson County fair regularly, along with the Christmas Parades. Jeff was involved with the snap group through the Rivertree Community Church. He also attended many dances at Townsend School. Jeff is survived by his father, Alden L. Cooper, of Cumming, Georgia; one brother, Daniel J. Cooper, of Jackson, Michigan; two adopted sisters, Misty Toll of Jackson, Michigan, and Rebecca (Gordon) Miller of Buckeye, Arizona, two stepbrothers, Tray D. Lazarus of Angola, Indiana and Richard R. Lazarus of Lansing, Michigan; special friends, Chad P. Noble, James Wheaton, Ken Jackson, Roxanne Crawford, and Carol Williams, all of Jackson, Michigan. He has a close bond with his cousin Donald Sharp, Jr. of Flint, Michigan, and various cousins, aunts, and uncles. He is preceded in death by his mother, Esther Cooper, and his stepmother Carolyn Lazarus Cooper. Memorial contributions are suggested to Cascades Humane Society. Please leave a message of comfort for Jeff’s family or sign his guestbook at www.EinederFuneralHomes.com.

The family of Jeffrey Alden Cooper created this Life Tributes page to make it easy to share your memories.

Send flowers to the Cooper family.