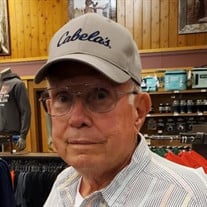 Jerry Thomas Taggart, 82, passed away unexpectedly, Saturday, July 3, 2021. Jerry’s family and friends will gather Monday, July 12, 2021, from 10:00 am – 11:00 am at Eineder Funeral Homes - Brooklyn Chapel. His funeral service will be held at 11:00 am, following visitation. Interment to take place at Highland Cemetery after the funeral service. Pastor Ned Bernstein will officiate. Military honors provided by American Legion, Post #315. He was born on August 13, 1938, in Jackson, Michigan to John and Wilma (McCourtie) Taggart. Jerry married the love of his life, the late Carol Schwartz, on June 16, 1962, in N. Miami Beach, Florida. He will be remembered as being an avid sportsman. Jerry proudly served his country in the United States Air Force after graduation from high school. He then pursued a career as a skilled tradesman at Ford Motor Company, retiring after 40 years of service. Jerry was a lifetime resident of Brooklyn and a member of the Brooklyn American Legion, Post #315. He loved spending time with his family, gardening, and home repairs. Jerry is survived by his children, Jeff (Camille) Taggart, and Debbie (Mike) Cramer; grandchildren Daniel Taggart and Jenea (Nathan) Uncapher; great grandchildren Mavis, and Shane Uncapher; nephews Rick and Alan Taggart and Dave Schwartz and niece Christine Schwartz; brother-in-law Bruce (Barb) Schwartz and sister -in-law Pat Schwartz. He is preceded in death by his parents, his wife of 54 years, Carol, brother James Taggart and sister-in-law June Cooper. Memorial contributions are suggested to the Brooklyn Food Pantry. Please leave a message of comfort for Jerry’s family or sign his guestbook at www.EinederFuneralHomes.com.

The family of Jerry Thomas Taggart created this Life Tributes page to make it easy to share your memories.

Send flowers to the Taggart family.