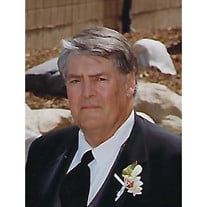 His Legacy... Jerry Ronald Wilson, 75, passed away December 21, 2019.  He was born on November 8, 1944, in Marlette, Michigan to Rex and Lillian "Ruth"(Diegle) Wilson. Jerry married, Elaine Hunt, on June 2, 1979, in Livonia, Michigan.   He will be remembered as an amazing father and great family man. Jerry proudly served in the US Navy on the USS Graham County, from 1966-1968 during the Vietnam War. He was a recipient of the National Defense and the Armed Forces Expeditionary Medals. Jerry, in his early days was a farmer on the family farm, then went on to work at GM Powertrain as a supervisor retiring after 30 years. He could fix anything and everything for his widowed neighbors or anyone that would need help. When their homes were converted to city utilities, he helped his neighbors with his electrical abilities. Jerry was an avid gardener, loved to golf and take his annual trip to Florida. Everyone that knew Jerry, loved Jerry and he will be greatly missed.    His Family... Jerry will be missed by his wife of 40 years, Elaine; his children, Christine (Todd) Petersen, Leah Conway, Robert Wilson, Michael Wilson, Jennifer (Eric) Petersen, and Caitlyn (Kevin) Clark; his mother Ruth Wilson; his sisters, Karen (Joe) Watson and Cheryl Zawilinski; grandchildren Alexis Wilson, Emilly Smith, Jake Petersen, James Conway III, Claire Petersen, Sean Conway, Logan Wilson, Brian Conway, Grant Petersen, Cole Wilson, Reese Wilson, Wesley Petersen Evelyn Clark and ; one great grandchild Nathan Stevens; many nieces and nephews. He is preceded in death by his father Rex; brother Richard Wilson; son Steven Wilson and daughter Dawn Wilson.   His Farewell... Jerry's family and friends will gather Thursday, December 26, 2019,  2:00 pm - 4:00 pm and 6:00 pm - 8:00 pm., at Borek Jennings Funeral Home, Braun Chapel and December 27, 2019 10:00 am - 11:00 am.  His Farewell will be held on Friday, December 27, 2019 at 11:00 am with the burial to follow at Highland Cemetery, Brooklyn, Michigan. Chaplain Kyle Herrick will serve as celebrant. Memorial contributions are suggested to St. Jude's Children Research Hospital. Please leave a message of comfort for Jerry's family at 1-877-231-7900, or sign his guestbook at www.borekjennings.com. .

The family of Jerry Ronald Wilson created this Life Tributes page to make it easy to share your memories.

Send flowers to the Wilson family.