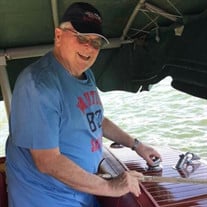 John A. Dale, Jr., 74, passed away on July 4, 2021. John’s family and friends will gather Friday, July 16, 2021 at St. Rita’s Catholic Church 10516 Hayes Rd., Clarklake, MI for visitation from 10:00 a.m. - noon. His funeral Mass will be held on Friday, July 16, 2021 at 12:00 p.m., at St. Rita’s Catholic Church in Clarklake, MI. Fr. Tom Helfrich O.S.F.S. will serve as celebrant. He was born on January 30, 1947, in Toledo, Ohio to John and Jane (Seawater) Dale. John married the love of his life, Linda Daily, on June 29, 1968, at St. Joseph Parish in Kalamazoo, Michigan. He will be remembered as a man who loved his family, his wonderful neighbors, his amazing in-laws, very special friends and all boats, especially Goldie, his 1954 Chris Craft Holiday. John cherished his grandchildren, sons, daughter-in-laws, and wife more than life. John was a parishioner of St. Rita’s Catholic Church in Clarklake since 1968 where he served as an usher, Eucharistic Minister, religious education instructor, youth group leader and many other roles. He contributed to his community as a Boy Scout leader in Brooklyn for many years and as a member of the Jackson Jaycees. He volunteered many hours at Lumen Christi as a member of the school board, band and theatre parent, was a member of the Titan Club, and every sport his sons were involved in. He also videoed almost every basketball game (home and away) for over 25 years. He was also a member of the Society of Manufacturing Engineers, the Lake Columbia Sail Club, and the Antique Boat Society. John worked as a Sales Engineer at Valenite (Troy MI) for over thirty years. He enjoyed golfing, radio controlled airplanes and especially enjoyed his time sailing, water skiing and cruising on the water in Goldie. He loved old boat engines and could almost always get them running like new. In fact he has a pole barn full of them waiting to be repaired! John went to Antique boat shows all around Mi, Ohio and Florida. He especially loved the Hessel boat show in the UP and the Mount Dora boat show in Florida. John will be greatly missed by his wife, Linda; his children, John “Andy” (Kristin) Dale of Onalaska, WI, Jeff (Heather) Dale of Madison, WI, and Matthew (Jennifer) Dale of Brooklyn, MI; his brother James (Jill) Dale of Clarklake, MI; grandchildren Maren, Adam, Kay, Ashley and Harrison; and his Aunt Eldonna Cox and his in-laws and cousins. He is preceded in death by his parents and sister, Joyce Dale. John passed away at the Hospice Home in Jackson which quickly became his home away from home. The amazing staff became part of his family and he and Linda truly loved them. They laughed with him, sang to him and cried with him over good times and bad. We cannot begin to thank each person there for their love and care, cranberry lemonade and ice cream sundaes. They will be in our hearts forever. Memorial contributions are suggested to Henry Ford Allegiance Hospice Home or St. Rita Catholic Church Religious Education Fund. Please leave a message of comfort for John’s family or sign his guestbook at www.EinederFuneralHomes.com.

The family of John August Dale Jr. created this Life Tributes page to make it easy to share your memories.

Send flowers to the Dale family.