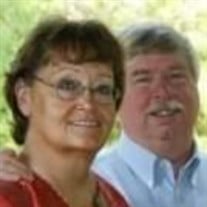 Judith Ann Maurer, 71, passed away December 5, 2021. Judith’s family and friends will gather Saturday, December 11, 2021 from 10:00 – 11:00 a.m. at St. Rita Catholic Church, 10516 Hayes Rd., Clarklake, MI. Her Memorial Mass will be held on Saturday, December 11, 2021 at 11:00 a.m. at St. Rita Catholic Church. Fr. Tom Helfrich O.S.F.S. will serve as celebrant. Judith was born on February 13, 1950, in Boston, Massachusetts to Virginia (Emery) Nunez. She married the love of her life, Charles Maurer, on March 10, 1973, in Michigan City, Indiana and was married for 48 happy years until Charles passed away in November of 2020. She will be remembered as a loving wife and mother who adored her faith and the Lord. Judith enjoyed spending time with her grandchildren and spoiling them whenever possible. She opened the first group home for Christ Centered Homes and she continued to work for them for many years as District Manager. Judith volunteered as a religious education teacher for special needs children at St. Anthony’s Catholic Church in Hillsdale, MI. Although she gave generously of her time to those in need, she relished her private time as well. Judith will be missed by her daughter, Jenna Chmielewski (Mark) of Clarklake, MI; siblings, Liz (Lamar) Greenhalgh of Salt Lake City, UT; Ramon Nunez of Augusta, ME; Rick Nunez of IN; and Jackie Nunez of Boston, MA; grandchildren Christopher Abbey, Brennan Abbey, Zachary Chmielewski and Sam (Emily) Chmielewski; and a great grandchild Evelyn Rose Chmielewski. She is preceded in death by her parents, her husband and a brother, Ed Nunez. The family would like to convey special thanks and appreciation to Right-at-Home Homecare and Careline Hospice for their wonderful care. Memorial contributions are suggested to the Brooklyn Food Pantry. Please leave a message of comfort for Judith’s family or sign her guestbook at www.EinederFuneralHomes.com.

The family of Judith Ann Maurer created this Life Tributes page to make it easy to share your memories.

Send flowers to the Maurer family.