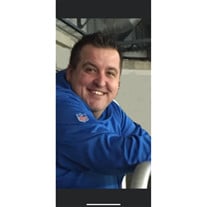 His Legacy... Kenneth Patrick Haneline, 46, passed away January 7, 2020.  He was born on July 6, 1973 in Pontiac, Michigan to Harold "Jake" and Priscilla (Patrick) Haneline.   He will be remembered as the life of the party. When he walked into the room, he was the party. Kenny always had a joke and was quite the prankster. He loved his family and had a heart of gold. Kenny liked sports, especially the Detroit Lions, and he enjoyed golf, even though he was not particularly good at it. He began his professional career at Aramark in 1993. In 1995, he was hired as a Manager at General Motors. They traveled to multiple locations along the path of his career, Kalmazoo, Indianapolis, Lordstown, Fort Wayne and most recently Lansing, Michigan. Kenny was a Manager and friend to all and had many work related accomplishments.  He was a member of the Professional Managers Network of General Motors, along with being a Mentor for the GM Mentors program.  Kenny will be missed by all who knew and loved him.   His Family... Kenny will be missed by his son Keaton Jacob and daughter Avery Elizabeth Haneline; siblings, Rodney (Karen) Haneline, Lori (Trevor) Sanford, Denise (Cal Summers) Coppernoll, and brother in-law Lenny Methner, several nieces and nephews Josh, Sierra, Tanner and Jacob, and his wife of 22 years, Amy.  He is preceded in death by his parents "Jake" and Priscilla, and sister Linda Methner.   His Farewell... Ken's family and friends will gather Saturday, January 11, 2020 from 10:00 am - 12:00 pm at Borek Jennings Funeral Home, Braun Chapel where his Farewell will be held at 12:00 pm. Pastor John Masters will serve as celebrant. Memorial contributions are suggested to Alzheimer's Association or Memorial contributions may be given to family for future designation.  Please leave a message of comfort for Kenny's family at 1-877-231-7900, or sign his guestbook at www.borekjennings.com.

His Legacy... Kenneth Patrick Haneline, 46, passed away January 7, 2020.  He was born on July 6, 1973 in Pontiac, Michigan to Harold "Jake" and Priscilla (Patrick) Haneline.   He will be remembered as the life of the party. When he walked into... View Obituary & Service Information

The family of Kenneth Patrick Haneline created this Life Tributes page to make it easy to share your memories.

Send flowers to the Haneline family.