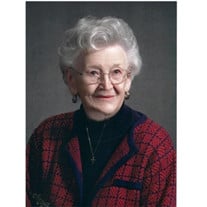 Wallison, Leocadia "Lee" Ann Arbor, Michigan   Her Legacy... Leocadia Maryan Wallison, 102, passed away January 30, 2020.  She was born on December 24, 1917, in Detroit, Michigan to Stanley and Marya (Kitzman) Smyczynski. Lee married Alphonse Statkiewicz in 1940, and later Hank Wallison in 1981. She will be remembered as being very ambitious. Lee came from a very humble background, not even speaking English until she attend public school. She left school at 10th grade to go to beauty school. Lee bought the shop she was employed at when she turned 18, thus becoming the owner and manager for the next 15 years. She met her first husband through a Polish folk singing and dancing group called Lyra. Lee retired from her business to raise her family. She was an accomplished homemaker, cooking, canning, gardening and sewing. Lee served as an officer of the Polish Lawyers Auxiliary and was an active member of the Jesuit mothers club. When Alphonse's health started failing she continued his accounting business from home. She also enjoyed traveling with her sisters-in-law when she met Hank, and continued to help him with his travel business.   Her Family...Lee will be missed by her children, Susan (Dennis) Walters, Gregory (Liz) Stack, Michael (Sharon) Stack, and Conrad (Carol) Stack; grandchildren, Juliann (George) Saractsis, Jonathan (Jennifer) Walters, Andrew (Bridget) Walters, Victoria Gilbert, Catherine (Charles) Curry, Mary (Ed) Snyder, Nicholas (Amanda) Stack, Adam (Brianna) Stack, Ian (Jennifer) Stack and Josef Stack; 17  great grandchildren; many nieces and nephews. She is preceded in death by her parents, her husbands, Alphonse Statkiewicz and Hank Wallison, and 2 brothers, Wallace Smythe and Steven Smythe.   Her Farewell... Lee's family and friends will gather Tuesday, February 4, 2020 from 9:30 am - 10:30 am with the Mass of Christian Burial to follow at St. Mary Roman Catholic Church, Manchester, Michigan.  Fr. Amal Rayabillai SdC, will serve as celebrant. Memorial contributions are suggested to Hope Clinic in Ypsilanti, Michigan.  Please leave a message of comfort for Lee's family at 1-877-231-7900, or sign her guestbook at www.borekjennings.com.

The family of Leocadia Maryan Wallison created this Life Tributes page to make it easy to share your memories.

Send flowers to the Wallison family.