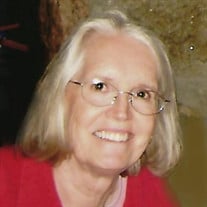 BRADRFOR, LINDA Brooklyn, Michigan: Linda L. Bradford, 73, of Jackson died Saturday, August 1, 2020 at home following an eleven-year battle with Parkinson’s Disease. Linda was born on November 5, 1946, in Traverse City, Michigan to Robert and Ardis (Gill) Brobeck. She graduated high school in Traverse City, and on November 12, 1966, at St. Francis Catholic Church, she was united in marriage to Michael E. Bradford. While in Traverse City, she was also employed by Giantway Food Market until 1967. Linda was an avid bird watcher, as well as a lifelong fan of the Detroit Tigers and Redwings. She was also an active member in the Catholic church, including St. Francis in Traverse City, St. Ann’s in Frankfort, and St. Rita’s in Clark Lake, where she enjoyed attending Bible study groups. Linda contributed to many Humane Societies and enjoyed the variety of animals on their 10-acre home-site. She is survived by her beloved husband, Michael; 2 sons, Brian C. (Lorin) Bradford of Battle Creek, and Michael F. Bradford of Brighton; one daughter, Michelle Lynn (Jon) Hale of Lansing; one sister, Pamela Warner of Traverse City; 6 grandchildren, Morgan, Sarah, and Madison Hale, Kyra Bradford, and Michael C. and Julia Bradford; a very special cousin, Darlene Snipes of Mt. Vernon, Washington; a special sister-in-law, Kathlene Marks of Port St. Lucie, FL; along with several nieces and nephews. She was preceded in death by her parents and her infant sister. Cremation has taken place with a private service and inurnment in Traverse City Memorial Gardens at a later date. Memorial contributions may be given to Cascade Humane Society. Please leave a message of comfort for Linda's family or sign her guestbook at www.einederfuneralhomes.com

The family of Linda Lee Bradford created this Life Tributes page to make it easy to share your memories.

Send flowers to the Bradford family.