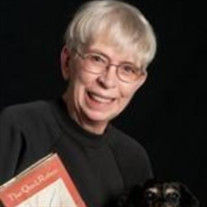 Smith, Millie “April” Manchester, Michigan Millie April Smith, 78, passed away June 30, 2020 at the St. Joseph Mercy Ann Arbor Hospital. She was born on June 10, 1942, in Ann Arbor, Michigan to Russell and Mildred (Shupe) Smith. She was known by her middle name, April. April graduated from Manchester High School in 1960; from Jackson Junior College in 1962; and from Eastern Michigan University with a BA in 1965, and with a Masters degree in Theatre Arts in 1971. She taught 9th and 10th grade English at Airport Community Schools in Carleton, MI from 1965 to 1967; Washtenaw County (MI) Head Start Project in 1969; and 7th grade English & Speech at Standish-Sterling (MI) Community Schools in 1969 to 1970. The majority of April’s work career was at the Department of Veterans Affairs Medical Center in Ann Arbor, MI, in Supply Service. She worked as a Contracting Specialist for many years, starting in 1970, then transferred to the Warehouse until she retired on March 31, 2000. After retirement from the U.S. Federal Government, April worked part time at the Manchester Township Library until her death. She was a dedicated and popular employee, and helped countless library patrons over the years. April was an active volunteer for other community activities. For years she worked at the Manchester Community Fair, always selling tickets at the same entry booth. She got involved in the bicycling community, working the Registration table every July at the AABTS One Helluva Ride event. She also worked many summers on the cross-state Pedal Across Lower Michigan (PALM) tour, where she was known as the Watermelon Lady, expertly cutting fruit for many appreciative bicyclists. For a few years she rode her recumbent bike on PALM tours also. She loved baseball and was a devoted fan to the Detroit Tigers, being a season ticket holder at the old stadium for many years with her parents and later with her sister Vickie. April loved to attend plays and musicals every chance she could, in Detroit and Ann Arbor, at the Chelsea Purple Rose Theatre, nearby communities, and Manchester High School productions. April was a lifetime reader. She was never without a book, sometimes more than one at a time. And of course, anyone who knew her was familiar with her love of animals, always sharing her life and love with many dogs and cats, from family pets, then into adulthood starting with John the gray cat (named after John Lennon) and Bobbie, her first little terrier. She is survived by her Dachshund, Greta, and her cats, Midget and Murphy. April’s family was a huge part of her life, and some of her favorite memories were from visiting her brother’s family in Vermont and from travelling overseas with family. She will be missed by her sister Vickie (Frank Lamitola) Smith; nieces Katie Smith and Megan Smith; sister-in-law Barbara Smith; her best friend Kathy Dimond and many close neighbors and friends. She was preceded in death by her parents, and brother Russell “Skip” Smith II. April’s family and friends will gather to celebrate her life at a later date to be determined. Memorial contributions are suggested to the Manchester District Library (P.O. Box 540, Manchester, MI 48158), or Sasha Farm Animal Sanctuary (P.O. Box 222, Manchester, MI 48158). Please leave a message of comfort for April’s family at or sign her guestbook at www.einederfuneralhomes.com

The family of Millie April Smith created this Life Tributes page to make it easy to share your memories.

Send flowers to the Smith family.