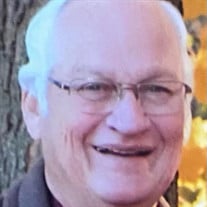 Raymond Lee Bruce- Pastor Raymond Lee Bruce, a man devoted to his faith, family, and ministry, entered into the Lord’s presence on December 17, 2020. There he joined his beloved wife Betty of 58 years, taking his place with her in the Kingdom they both treasured. He is survived by his three children: Amy (Mark) Blackgrove, David (Stephanie) Bruce, and Carolyn Bruce. He also left a profound impact on his eight grandchildren: Drayton, Hailee, Drew, Camryn, Reece, Carter, Cara, and Cade; as well as two great-grandchildren, Parker and Blakely. He was preceded in death by his parents, Earl Carson Sr. and Sarah Carolyn Bruce, and his three brothers: Earl, Jack, and Bobby. He is survived by his brother, Jerry. A graduate of Bob Jones University, he began his pastoral ministry by serving as a youth pastor for 4 years in Belleville and Flint, Michigan, before he felt God’s call to become the senior pastor at Hale Baptist Church. After 10 years there, he accepted a position at First Baptist Church in Brooklyn, Michigan, where he ministered for 28 years. It was within these roles that Pastor Bruce displayed his deep devotion to his congregation by humbly serving, counseling, and praying for each member, often in the wee hours of the night. His love for children was reflective of Christ’s as he welcomed them warmly, generously sharing from his abundant supply of Tootsie Rolls. His retirement did not keep him from faithful service, and he demonstrated this as a member of Fellowship Baptist Church, where he filled the pulpit occasionally and taught Sunday School alongside his wife. Founder of the Old State Road Stump Sitters, a family hunting club he began in 1968, Raymond spent years of his life in the hunting blind, establishing a tradition and passion for the outdoors that lives on through his children and grandchildren. He cherished time spent in the Smoky Mountains with Betty where they often visited the scenic Cades Cove. Watching wildlife from his front porch rockers, studying Proverbs in his sunroom, honoring his southern roots by rooting for the Crimson Tide, and singing hymns alongside his family and congregation were among his most favored pastimes. Visitation will be held at Fellowship Baptist Church on Wednesday, December 30, 2020 from 11:00 A.M. to 1:00 P.M., with a funeral service to follow immediately after. A private burial will take place following the conclusion of the service. COVID-19 mandates and social distancing guidelines will be observed. In lieu of flowers, donations may be made to the Henry Ford Allegiance Hospice Home or the missionary fund at Fellowship Baptist Church. Funeral services are provided by Eineder Funeral Homes – Brooklyn Chapel

Raymond Lee Bruce- Pastor Raymond Lee Bruce, a man devoted to his faith, family, and ministry, entered into the Lord&#8217;s presence on December 17, 2020. There he joined his beloved wife Betty of 58 years, taking his place with her in the... View Obituary & Service Information

The family of Pastor Ray L. Bruce created this Life Tributes page to make it easy to share your memories.

Send flowers to the Bruce family.