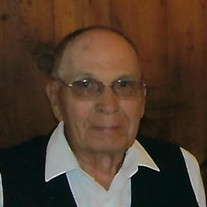 Richard Warren Bremenkampf (Warren), a beloved husband, brother, father, and grandfather, passed away at his home in Brooklyn, Michigan on November 15, 2020. Warren was born on August 31, 1930 at home in Dearborn, Michigan to Herman and Hazel (Trowbridge) Bremenkampf. He had one brother, Gordon Bremenkampf. He was raised in Dearborn, Michigan at his family home and birthplace on Beech Street. He spent considerable time at the family farm of his maternal grandparents, Samuel and Molly Trowbridge. He attended Dearborn schools through junior high school, after which he transferred to the Edison Institute, a school that emphasized the mechanical and industrial arts, founded by Henry Ford, and located within Greenfield Village and the Henry Ford Museum. While a student, Warren played on the E.I. basketball team, wearing a jersey proudly bearing his favorite numeral, five. While attending E.I. he learned automotive trades, metal and carpentry skills, clock making and servicing, and weaving, among others. It was in a shop class at E.I. where he met Henry Ford, who once, during a walk-through visit, stopped and demonstrated for the young student how to properly machine a metal part. Warren later was assigned to wind clocks at the Ford Motor Company patriarch’s estate, Fairlane. Soon after graduating from the Edison Institute in 1948, Warren began a thirty-eight year career at Ford Motor Company. When he joined Ford, having trained at Edison Institute as a machinist, he expected to work in Ford Powertrain. However, upon his arrival, his hiring supervisor called him a “Ford Brat” and assigned him to Design where he worked for the balance of his career. He was known as a hard worker, a perfectionist, one to have high expectations for himself and others, and not one to suffer fools gladly. He was a great friend to many, including his co-workers. For years Warren carried on his relationships with former colleagues from the Ford Design Center at Mason’s Bar and Grill in Livonia where they gathered monthly. While employed at Ford, he joined the U.S. Navy Reserve, where he was assigned to the Grosse Ile Naval Air Station on the island of Grosse Ile, Michigan. He spent four years with the Reserve where he trained one weekend each month and two full weeks each summer while maintaining his employment at Ford. He regularly flew second seat in two fighter aircraft famous in World War II, the Corsair and the AD. Warren and his wife, Jacqueline (Pettit) were married for 58 years and raised five children: Karen (Steve Olmstead), Donna (Paul DeGrazia), Brian, Amy (Dan Bedore) and Susan (Casey). Warren was an active athlete throughout much of his life. He not only played varsity basketball and baseball while attending the Edison Institute, but continued to participate in baseball, softball, bowling and golf leagues at a competitive level for many years afterward. He set high expectations for himself and fellow team members even in recreational pursuits. He was a meticulous craftsman who loved working with his hands and valued hard work. After his retirement, he and Jacqueline moved to their lake home, built by Warren in the Irish Hills area where they enjoyed decades of Michigan seasons and family gatherings, including visits from his children and eight grand-kids. The immaculate condition of Warren’s home, land, vehicles, and tools told the story of his life up until the end. A neighbor reported seeing him in the yard raking and burning leaves the day before his passing. Warren’s biography would be incomplete without paying tribute to his neighbor and closest friend of many years, Father Mike Hohenbrink, semi-retired pastor of St. Michael The Archangel Parish in Findlay, Ohio. Father Mike and Warren spent many, many hours together at one of their cottages or the other, conversing about a wide spectrum of subjects while enjoying a glass of wine or a can of Bud Light. The regular dinners spent together rotated between their cottages and local restaurants. Indeed, it was Father Mike who discovered that Warren had passed when he stopped by to confirm arrangements for dinner that evening. Warren’s family will always be grateful for his relationship with Father Mike. Warren was preceded in death by his wife Jacqueline and daughter Karen. He is survived by his brother Gordon and his son, Brian (Shawna, Justin, Brooke), and daughters Donna (Mario, Michael), Amy (Samantha, Joseph, Allison) and Susan. Warren’s family asks that those moved to make a donation, consider St. Michael The Archangel Parish in Findlay, Ohio. Donations can be made in Warren’s name at https://findlaystmichael.weshareonline.org/. Please leave a message of comfort for Warren’s family or sign his guestbook at EinederFuneralHomes.com.

Richard Warren Bremenkampf (Warren), a beloved husband, brother, father, and grandfather, passed away at his home in Brooklyn, Michigan on November 15, 2020. Warren was born on August 31, 1930 at home in Dearborn, Michigan to Herman and Hazel... View Obituary & Service Information

The family of Richard "Warren" Bremenkampf created this Life Tributes page to make it easy to share your memories.

Send flowers to the Bremenkampf family.