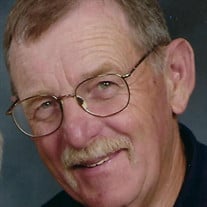 Robert “Bob” Elrod, 83, passed away at home on September 9, 2021, surrounded by his wife and children. Bob’s family and friends will gather from 2:00 – 4:00 p.m. and from 6:00 p.m. – 8:00 p.m. on Wednesday, September 15, 2021, at Eineder Funeral Homes - Brooklyn Chapel. A gathering of family and friends will also take place before his funeral service on Thursday, September 16, 2021, from 10:00 a.m. – 11:00 a.m. at the Brooklyn Presbyterian Church, 160 N. Main St., Brooklyn, MI. His funeral service will be held at 11:00 a.m. Pastor Tami Recob will serve as celebrant. Bob was born on February 21, 1938, in Jackson, Michigan to James and Helen (Shuster) Elrod. He married the love of his life, Shirley, on October 9, 1959, in Brooklyn, Michigan. He will be remembered as a loving husband, father and grandfather who was deeply devoted to his community. Bob was a 1957 graduate of Brooklyn High School. He began his career at Consumers Power Co. where he worked from 1959 – 1998. He was a member of the Columbia Athletic Boosters for over 30 years and was instrumental in the school campus improvements which took place in the 1990’s. He served on the Columbia School Board for 12 years and has been the Columbia Township Supervisor for 13 years. He volunteered as planner and co-coordinator of Arts in the Park with Duaine Morin for 13 years. He also served his community as long-time coach for Little League in Brooklyn. Bob never missed one sporting event that his children or grandchildren were involved in. He loved going to MSU football games and was a season ticket holder for over 20 years. He enjoyed golf with family and friends. He loved playing guitar and especially enjoyed bluegrass music. He spent many years as a member of the Village Square Acoustics. Another passion for Bob was harness racing (especially with his favorite horse “Columbia Belle”) at many fairs and the Jackson Harness Raceway. He also volunteered with the Jackson Pony Trotting Club. Bob was a longtime member of Brooklyn Presbyterian Church. Bob will be missed by his wife, Shirley; his children, Pam (Dave) Bendele of Brooklyn, MI; Susanne (Mickey) Neal of Napoleon, MI; Robin Elrod of Jackson, MI; Sandra (Donald) Mazuchowski of Eaton Rapids, MI; Robert (Kristy) Elrod II of Napoleon, MI; and Wendy (Len) Hawkins of Brooklyn, MI ; siblings James (Cheryl) Elrod of South Bend, IN; Judy (Bill) Bivins of Clarklake, MI; Kathy Stubbs (Jim Gray) of Kalamazoo, MI; and Jeanette Elrod of Nashville, TN; grandchildren, Nicole (Chris) Champanois; Amanda Mike) Hood; Tiffany Gelia; Corey (Brittany) Bycraft; Dalton (Mallory) Bycraft; Guy (Odessa) Emberton; Travis (Marissa) Emberton; Brittany (Ben) Aylor; Sean (Erin Higgins) Mazuchowski; Kyle Mazuchowski; Kelly (Troy) Hulbert; Lucas (Katie) Elrod and Austin Elrod; 18 great- grandchildren; and 2 great-great grandchildren. Other surviving relatives are Benny and Irene Snider of Brooklyn, MI; Deanna Brown of Napoleon, MI; Rose Elrod of Liberty, MI and Curt Barden of Leslie, MI; many nieces and nephews; and special people in his life, great-nephew JJ Elrod and good buddy Steven Moull. He is preceded in death by his parents; a sister Betty Barden and a brother Jack Elrod. Memorial contributions are suggested to the Brooklyn Presbyterian Church Discretionary Fund, the Brooklyn Food Pantry or Columbia Township Firefighters Association. Please leave a message of comfort for Bob’s family or sign his guestbook at www.EinederFuneralHomes.com.

The family of Robert "Bob" Elrod created this Life Tributes page to make it easy to share your memories.

Send flowers to the Elrod family.