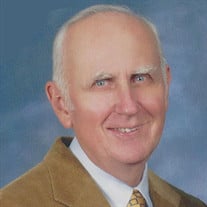 Robert “Bob” Miller, 92, passed away April 10, 2022. Bob’s family and friends will gather Monday, April 18, 2022 from 3:00 p.m. – 7:00 p.m. at Eineder Funeral Homes - Brooklyn Chapel and Tuesday, April 19, 2022 from 10:00 a.m. – 11:00 a.m. at St. Mark’s Lutheran Church, 11151 U.S. Highway 12, Brooklyn, MI. His funeral service will immediately follow at 11:00 a.m. at the church. Vicar Bryan Varblow will serve as celebrant. Bob was born on August 28, 1929, in Dearborn, Michigan to Richard and Lillian (Krueger) Miller. Bob married the love of his life, Joanne Nutt, on September 13, 1951, in Dearborn, Michigan. They were married for 68 years until Joanne’s passing in 2020. He will be remembered as a loving husband, father and grandfather. Bob worked at BASF for 42 years. In his leisure time he enjoyed puzzles, especially Sudoku; spending time outdoors in the garden and on the water as a catch-and-release “friendly fisherman”. He was a committed member of St. Mark’s Lutheran Church in Brooklyn serving the church previously as an elder. Bob will be missed by his children, Mark (Catharine) Miller; Linda Peterson and Cynthia Miller; a sister, Rhema Subject; grandchildren, Joel Miller, Mary Brennan, Ryan Brennan, Jennifer McKinley and Megan Marshall. He is preceded in death by his wife, Joanne; a brother, Richard Miller and son-in-law, Jeffery Peterson. Memorial contributions are suggested to Chelsea Retirement Community Scholarship Fund, 805 W. Middle St., Chelsea, MI 48118 in the name of Robert Miller. Please leave a message of comfort for Bob’s family or sign his guestbook at www.EinederFuneralHomes.com.

The family of Robert August Miller created this Life Tributes page to make it easy to share your memories.