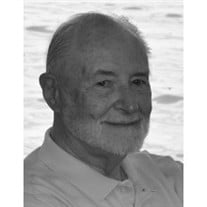 Snyder, Jr., Robert "Dr. Bob"Clarklake, MichiganHis Legacy... Robert Melvile Snyder, Jr. Age 95 passed away August 24, 2019. He was born on January 8, 1924 in South Bend, Indiana to Robert and Jeanette (Ridenour) Snyder. Bob served honorably in the Army during WWII. In the early 1970's, while working on his graduate degree at University of Toledo, Bob got involved in the Leadership Training and Organizational Development Training offered by the Episcopal Church in Southern Michigan. Through these training programs, he learned the skills and insights needed to make his Master's Degree learning applicable to the work he was doing with young people in the Presbyterian Church in Ohio. At a training event early in his involvement with the program, Bob met Joan Nutten, who later became his wife and partner in their own counseling practice. Joan was a licensed school social worker when they met. Both Bob and Joan went back to graduate school and earned Ph.D.'s in clinical psychology. Starting with troubled young children in public school classrooms, they went on to become exceptionally effective counselors, couples counseling in particular. Bob was also very active in the Communications Camp program at Columbia Central High School. When Joan died, Bob resolved to go on with the work he and Joan had made the center of their lives together. Dr. Bob will be missed by all who knew and loved him. His Family... Dr. Bob will be survived by his two sons, Robert (Denise) Snyder and John (Barbara) Snyder; 5 grandchildren, Mark, Johnathan, Anna, Alexander, and John; and 5 great grandchildren He is preceded in death by his parents, wife Joan, two sisters and the mother of his sons, Lorna. His Farewell... Dr. Bob's family is holding a private Farewell in his honor and will be having a memorial service at a later date at All Saints Episcopal Church. Please leave a message of comfort for Dr. Bob's family at 1-877-231-7900, or sign his guestbook at www.borekjennings.com.

The family of Robert "Dr. Bob" Snyder, Jr. created this Life Tributes page to make it easy to share your memories.