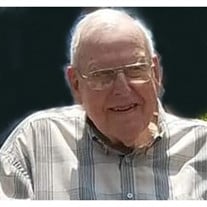 Wahr, Robert Oscar Brooklyn, Michigan   His Legacy... Robert Oscar Wahr, Age 90, passed away November 23, 2019.  He was born on August 13, 1929, at home in Norvell Township, the son of Oscar and Amelia (Fox) Wahr.  Bob married the love of his life, Beverly Reed, on July 11, 1959 at the Brooklyn Presbyterian Church.  Bob served honorably in the United States Army during the Korean Conflict where he was stationed in Germany as a Military Policeman.  After his service to our country he returned to Brooklyn where he worked at the Brooklyn Ford Plant.  After that plant closed he was transferred to the Saline Ford Plant retiring after 31 years in 1979.  Bob was not one to sit around long when his friend asked him to help with carpentry, of which he retired from after 20 years.  He was a member of the Brooklyn Masonic Lodge, the Brooklyn American Legion and a member of the Brooklyn Presbyterian Church. Bob was a loving husband, father and grandfather who will be missed by all who knew and loved him.   His Family... Bob will be missed by his wife of 60 years, Beverly, two sons, Robert (Debbie) and Douglas (Donna) Wahr, a daughter Amy (Tom) Goetsch, eight grandchildren, Stephanie Blanchard, Eric, Alex, Cody, and Corey Wahr, Amarah Mukatren, Chloe and Emily Goetsch.   He is preceded in death by his parents and sister Virginia Wahr Wakefield.   His Farewell.... His family and friends will gather Saturday, November 30, 2019 from 10:00 am until 11:00 am at the Brooklyn Presbyterian Church 160 N. Main St., Brooklyn where his Memorial Service will begin at 11:00 am.  Rev. Dr. M. Jacob Kaufman will serve as celebrant. Memorial contributions are suggested to the Brooklyn Presbyterian Church.  Please leave a message of comfort for Bob's family at 1-877-231-7900, or sign his guestbook at www.borekjennings.com.

The family of Robert "Bob" Wahr created this Life Tributes page to make it easy to share your memories.

Send flowers to the Wahr family.