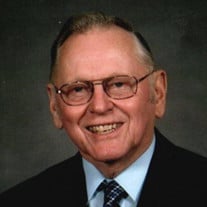 Roger Dean Howe, 85, of Brooklyn, Michigan passed away Friday, December 31, 2021, peacefully at home with his loving family around him. Roger’s family and friends will gather Saturday, January 8, 2022 from 10:00am – 12:00 pm at Heart O' Lakes United Brethren Church, (7031 Jefferson Road, Brooklyn, MI ). His funeral service will follow the gathering at 12:00 pm. Pastor and grandson Brandon Maybee and Pastor Cyle Young will serve as co-celebrants. Roger was born on March 18, 1936, in Brooklyn, Michigan to Cloys and Merle (Peterson) Howe. Roger married the love of his life, Janet Landers, on June 22, 1956, in Brooklyn, Michigan He will be remembered as a remarkable man that was sweet, kind, gentle and generous. Roger was a member of the Heart O' Lakes United Brethren Church for 47 years, where he was a head usher for 30 years, served on the board, and started the men’s bible study, which continues to this day. He gained employment at the Brooklyn Ford plant, then moved to the Saline Ford plant, retiring after 30 years of service. Roger loved his farm, his cows and his tractors, particularly John Deere. He was a proud member of the Michigan Wood Carver Association and loved being in his workshop, especially when the grandchildren were around. He had a terrific sense of humor. Roger made it a point to attend all his grandchildren’s events, whether they be local or required travel to Tennessee. He fiercely loved his family. Roger lived his life according to the church saying, “Love God, Love People”. His smile was often the first face you saw entering the church. After his retirement, Roger worked 16 years at Borek Jennings Funeral Homes, compassionately serving the Brooklyn and Manchester Communities. He will be greatly missed by all whose lives he touched. Roger is survived by his loving wife of 65 years, Janet; his children, Kim (Daniel) Shanks; Kathy (Paul) Maybee; Randy (Christie) Howe and Roger Howe II; two brothers Fred Howe and Richard Howe; grandchildren Joshua, Erin, Cori, Brandon, Kacie, Amber, Grace, James and Janice; twenty-two great grandchildren; and several nieces and nephews. He is preceded in death by his parents, sister, Frances and brother Norman. Memorial contributions are suggested to Heart O' Lakes United Brethren Church, Brooklyn. Please leave a message of comfort for Roger’s family or sign his guestbook at www.EinederFuneralHomes.com.

The family of Roger Dean Howe created this Life Tributes page to make it easy to share your memories.

Send flowers to the Howe family.