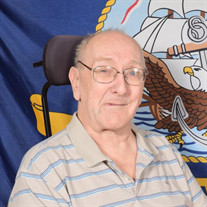 Stephen (Steve) Dean Muterspaugh died surrounded by family in his sister’s home in Brooklyn on February 2nd, 2021. He was 69. Steve was born on January 5th, 1952 in Jackson, MI to Wilbert (Bill) Muterspaugh and Joan (Smith). Steve is survived by his daughter, Melissa (Muterspaugh) Jaén and husband, Jorge; his son, Robert Muterspaugh and wife, Alicia; his grandson, Isaac Muterspaugh; his siblings, Rick (Marlinda), Mike (Vicky), Linda Fiero, Jerry, Karen (Carry) McCann, and Julie (Kevin) Yeager; and by his 14 nieces and nephews. He was preceded in death by his parents, Wilbert (Bill) Muterspaugh and Joan (Smith), and niece, Melanie. Steve was a proud Lumen Christi Titan, graduating in the class of 1970. After high school, he enlisted in the US Navy, which served as a source of pride to him for the remainder of his life. Steve had a great varied professional life, and was unafraid to pursue his interests at any age. He was an accomplished nurse of unparalleled skill, and his empathy toward his patients persisted long after his nursing career concluded. Steve also got his Bachelors of Business in Computer Science, owned and operated the Jackson County Day School, and briefly worked with the Transportation Security Administration in the months following September 11th. Steve was a brilliant and intelligent man who could effortlessly learn new skills, and he was never afraid to try his hand at a new adventure. Steve was also a dedicated father who never missed an opportunity to enrich his children’s lives. He annually attended Camp o’ the Hills Father Daughter camp to support the Irish Hills Girl Scouts in camp maintenance projects. Later, he learned the rules of softball specifically to be able to coach his daughter’s middle school team. When his son began to play hockey, Steve trained to become a hockey referee, and was present for every weekly Boy Scout meeting. He was an uncomplaining chauffeur, withstood more than one garage band performance at his home, and was always available to partake in a movie night, a game of catch, or a political debate with his daughter. He reveled in his most recent role as a doting grandfather to Isaac, who he loved immeasurably. Steve was known for his love of the Michigan sports teams, most especially the Red Wings, table games, science fiction and fantasy, Clive Cussler books, Law & Order, and a good Euchre competition. He loved golfing with his brothers, tagging along on shopping trips with his sisters, gathering with his family for holidays, and enjoying conversation and a good meal. His shopping trips invariably included M&Ms, Oreos, Pringles, and Pepsi, and he never met a dog he didn’t love. We will remember Steve as a father, brother, and grandfather who was defined by his resilience and grace, curiosity, optimism, strength, and above all, faith. He had an infinite amount of love to give, and so many in Jackson, Grand Rapids, and further, were lucky recipients of that love. He has left an indelible print on all our lives, and we love him and miss him immensely. A mass will be held in Steve's honor at Our Lady of Fatima Catholic Church in Michigan Center, Michigan on Saturday, February 6th at 11:00am, with Fr. Satheesh Alphonse officiating. Family and friends are invited to gather beginning at 10:00am to share their condolences. In lieu of flowers, the family requests donations to be made in Steve's name to the Grand Rapids Home for Veterans, 3300 Monroe Ave NE, Grand Rapids MI, 49505. The family would like to thank CareLine Hospice for the care they provided in Steve’s final days, and would also like to thank the staff of the Grand Rapids Home for Veterans, especially Naomi, Caitlin, and Karen, for their dedication, friendship, love and support over the years. You truly became family to Steve.

Stephen (Steve) Dean Muterspaugh died surrounded by family in his sister&#8217;s home in Brooklyn on February 2nd, 2021. He was 69. Steve was born on January 5th, 1952 in Jackson, MI to Wilbert (Bill) Muterspaugh and Joan (Smith). Steve is... View Obituary & Service Information

The family of Stephen Dean Muterspaugh created this Life Tributes page to make it easy to share your memories.

Send flowers to the Muterspaugh family.