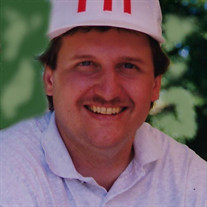 Matthews, Ted Manchester, Michigan Highlights of the life of Ted Gerard Matthews. In September of 1960, &#8220;quietly&#8221;, another Matthews&#8217;s baby was born into this world, as the 5th son of George and Loretta. He was to become known... View Obituary & Service Information

The family of Ted G. Matthews created this Life Tributes page to make it easy to share your memories.

Highlights of the life of...

Send flowers to the Matthews family.