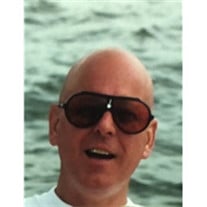 Downs, Terrence "Terry"Onsted, MichiganHis Legacy... Terrence Allan "Big T, Big Dog" Downs, 64, passed away October 21, 2019. He was born on October 15, 1955 in Detroit, Michigan to Geraldine Downs. He will be remembered as the "bald guy with... View Obituary & Service Information

The family of Terrence "Terry" Downs created this Life Tributes page to make it easy to share your memories.

Send flowers to the Downs family.