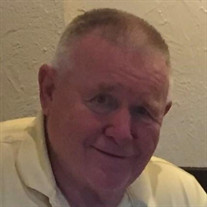 Thomas Merrick Burch, 80, passed away peacefully, Saturday, February 20, 2021. Tom’s family and friends will gather Tuesday, February 23, 2021 from 3:00 pm – 8:00 pm, with a Rosary to be at 7:00 pm and Wednesday, February 24, 2021 from 10:00 am – 11:00 am at St. Mary Roman Catholic Church,( 210 W. Main Street, Manchester). His Mass of Christian burial will be held Wednesday, February 24, 2021 at 11:00 am. Fr. Bosco Padamattummal will serve as celebrant. A private interment will take place in the spring at St. Mary Roman Catholic Cemetery, Manchester, Michigan. Covid -19 mandates will be observed, masks and social distancing are required. He was born on February 4, 1941, in Jackson, Michigan to Harold and Florence (Kirk) Burch. Tom married the love of his life, Ruth Townsend on September 9, 1961, in Manchester, Michigan. Tom is a 1959 graduate of Manchester High School. He was a lifetime member of the Manchester Community, St. Mary Roman Catholic Church and Knights of Columbus, being active in the 3rd degree and 4th degree Color Guard and a past Grand Knight. Tom was a very charitable person and loved giving back to his community. He spearheaded multiple fundraisers, and was a fabulous party planner that could put anything together quickly and have it turn out terrific. He was one of the founding members of the St. Mary Fish Fry and was active in his early years with the Manchester Chicken Broil. Tom was an avid Detroit Tigers, Red Wings and U of M football fan, loved fishing, camping and telling jokes, he was an awesome character of his own story telling. He was a collector of many things. He will be remembered for his amazing popcorn and fabulous brisket. His most precious gift was to instill in his children to be passionate about their beliefs. Tom is survived by his wife of 59 years, Ruth; his children, Dan (Deb) Burch, Colleen (Gary) Sweetland, Jim (Shelia) Burch and Cathy (Jim) McMonagle; sisters, Mary Beth (Rod) Miller and Ann Becktel; grandchildren, Danielle (Carl) VanHoof, Sarah (Tim) LaValley, Andrew (Alex) Burch, Matthew Burch, Abbey Burch and Libbey Burch, Megan Sweetland, Bethany Burch, Tucker Burch, and Brody Burch, Jimmy (Grace) McMonagle; great grandchildren, Faith, Amelia, Isaac, Theo VanHoof, Hosanna, Lydia, Abigail and Malachi McMonagle; special cousins Bob Brick and Rick (Debbie) Burch, and his loyal dog, Daisy, and several nieces and nephews. He is preceded in death by his parents, brother-in-law Larry Becktel and niece Marci Miller. Memorial contributions are suggested to St. Mary’s Parish or Pious Union of St. Joseph of Grass Lake Chapter. Please leave a message of comfort for Tom’s family or sign his guestbook at www.EinederFuneralHomes.com.

The family of Thomas "Tom" Burch created this Life Tributes page to make it easy to share your memories.

Send flowers to the Burch family.