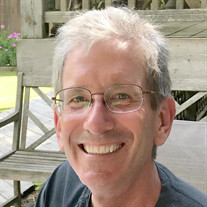 Thomas “Tom” Duncan Kladzyk passed away in his home in Manchester, Michigan on January 21, 2021, lovingly encircled by family and friends. With a beaming smile and welcoming personality, Tom had a big life that was full of love and warmth. A devoted husband, father, grandfather, brother, son, uncle, and friend, he delighted in the joys of family, friendship, civic engagement, and stewardship of mother nature. Born on March 20, 1960, Tom grew up in Bad Axe, Michigan, the youngest of four kids: his older siblings were Frank Jr., Pam, and Kathy. His parents, Frank and Marie, owned and operated the Franklin Inn in Bad Axe. Young Tom would help his mother clean the guests’ rooms, and learned the value of a hospitable spirit and strong work ethic from an early age. He met his wife Jo in high school -- they first bonded over a shared love of “up north,” where they would later find a second home in the Upper Peninsula community of Grand Marais. At the time of Tom’s death, they had been together for 43 years, during which they shared countless adventures in the great state of Michigan. As a teen, Tom’s love of music blossomed: he began working at Huron Music in Bad Axe in high school, and continued to work there well into college. An avid and meticulous rock & roll aficionado, Tom carefully catalogued every concert he attended throughout his life, and joyously shared this love with his family. Tom attended first Michigan Tech, then Central Michigan University, then finally the University of Michigan, where he completed his undergraduate degree in Electrical Engineering in 1985. A faithful alumni and uncommonly enthusiastic fan of U of M sports, Tom’s time at the University of Michigan was foundational. A motley crew he met at “the Dive” on Church street would prove to be his lifelong friends and his partners in sometimes wild and mildly illegal shenanigans. Tom had a fearless independence, and some years after college decided he wouldn’t be happy with a life spent behind a desk. Instead, he launched his own holiday lighting business in 1988, and through his entrepreneurial savvy, was able to grow it into a large enterprise that made Michigan communities sparkle and gleam at Christmastime. His company put up the Christmas lights in downtown Ann Arbor for over 30 years. Working with Holiday Lighting was a natural fit for Tom, since he loved being outside and leading an active lifestyle. A conservationist and vegetarian, “salad boy” Tom was well-attuned to the glories of the natural world, and found ways to protect earth’s resources through the practices and principles of his daily life. His outdoor passions included hiking, kayaking, sailing, and golf. In recent years he enjoyed ice-climbing and snow-shoeing in the Upper Peninsula, and derived great joy from exploring the stunning terrain around Grand Marais. Tom was a consummate host and threw iconic parties. His annual Michigan football parties, the Holiday Lighting Christmas party, and the Summer Concert Series at the Gallery in Grand Marais became unmissable events. For those who have seen bumper stickers that read “I’d Rather Be in Kladzyk’s Basement” floating around Ann Arbor, those refer to Tom Kladzyk’s parties. He liked to go 110% when it came to festivities, a reflection of his zest for life, and the joyful celebrations he hosted will be talked about for years to come. Tom was a devout Catholic, but was also open-minded and accepting of all religions and spiritual practices. He was a philanthropist, reflecting his deep and committed social consciousness. The organizations he supported were wide-ranging and included environmental causes, public radio stations in underserved parts of America, and Native American schools. He received an honorary degree from Orchard Lake St. Mary’s in recognition of his long-term support and family association with the school. He was involved in his community and served on the Planning Commission in both Manchester and Grand Marais. Generosity and optimism were hallmarks of his character; as Jo said, “he was the type of guy that would do anything for anybody,” and he didn’t have to be asked. Tom died from glioblastoma, a disease he lived with for the last 2 and a half years of his life. He is survived by his wife Jo, his children Tristan and Ellee, his grandchildren Emerson and Bode, his sister Pamela, and a large extended family. He is predeceased by his parents Franklin Sr. and Marie, and his siblings Franklin Jr. and Kathryn (Brown). There will be a public visitation at St. Mary Catholic Church in Manchester, Michigan on Wednesday, January 27, from 4 to 8 P.M. with a prayer service at 7 P.M., and a private funeral mass on January 28. A big “to-do” will be held in Grand Marais in summer 2021, details TBA. Donations may be sent to https://medicalgiving.stanford.edu/, designated to Dr. Melissa Bondy’s Glioblastoma Research Fund., Arbor Hospice, High Plains Public Radio, or plant a tree in his honor. Viva Tom. Vaya con dios. Please leave a message of comfort for Tom’s family or sign his guestbook at www.EinederFuneralHomes.com.

Thomas &#8220;Tom&#8221; Duncan Kladzyk passed away in his home in Manchester, Michigan on January 21, 2021, lovingly encircled by family and friends. With a beaming smile and welcoming personality, Tom had a big life that was full of love... View Obituary & Service Information

The family of Thomas Kladzyk created this Life Tributes page to make it easy to share your memories.

Thomas “Tom” Duncan Kladzyk passed away in his home in Manchester,...

Send flowers to the Kladzyk family.