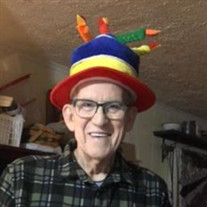 Wandell Miller, age 82, passed away surrounded by his family, following an extended illness. Wandell is survived by his daughters Martha (Brent) Fordyce and Angie (Stacey) Reynolds, of Jackson, MI, his daughter Teresa (Donald) Oesterle, of Grass Lake, MI; stepson Phillip (Valerie) Mullins of Spencer, TN; his ex-wife and best friend Merlene Sizemore of Dexter, MI and his grandchildren Sherri Reynolds, Cory (Janet) Reynolds, Krystle (Roland) Campbell, and Joshua (Jenny) Fordyce, and several step-grandchildren, nieces and nephews. He is also survived by his sister Janet (Bill) Justice of Mt. Vernon, Ohio; close friends Sandy Ingels of Morehead, KY and Lloyd Poore of Monroe, MI. He is preceded in death by his wife Clara “Jody” Miller of Spencer, TN; his parents Ethel and Anderson Miller and his siblings Joseph (Louise) Miller and Loretta (Clifford) Toney, all of West Virginia, and Barbara Ciaburri of Connecticut. Wandell was born in West Virginia on July 10, 1938, and was a school teacher in a one-room schoolhouse for a time, before joining the U.S. Army. Wandell and his family moved to Michigan with the auto industry boom, eventually retiring from Ford Motor Company. Wandell was a loving father, who enjoyed laughter and listening to his daughters’ and Merlene’s silliness when they were all together, working on cars, tinkering with computers, good food, playing cards, and listening to country music. He enjoyed spending time with his kids, grandkids, and his great grandson, baby Bryce. Wandell had a deep faith in God, and he will be deeply missed by all who knew him. Due to the current Covid-19 Pandemic, private services are being held. Reverend LeAnn Seto will officiate. Burial will be at Oak Grove Cemetery. In lieu of flowers, memorial donations can be made to the American Cancer Society or Ele’s Place. Please leave a message of comfort for Wandell’s family or sign his guestbook at www.einederfuneralhomes.com

The family of Wandell Miller created this Life Tributes page to make it easy to share your memories.

Wandell Miller, age 82, passed away surrounded by his family,...