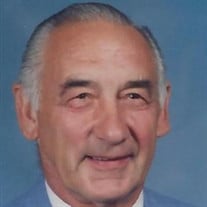 Willard Earl Chapin, 94, passed away June 21, 2021 at Lenawee Medical Care Facility, Adrian, MI. Willard’s family and friends will gather from 4:00 p.m. – 7:00 p.m. on Sunday, June 27, 2021 at Eineder Funeral Homes - Brooklyn Chapel, 137 So. Main St., Brooklyn, MI and at 10:00 a.m. on Monday June 28, 2021 at Brooklyn Presbyterian Church, 160 N. Main St., Brooklyn, MI. His funeral service will be held at 11:00 a.m. on Monday, June 28, 2021 at Brooklyn Presbyterian Church. Interment of ashes will follow at Highland Cemetery. Military honors will be provided by Brooklyn American Legion. He was born on June 7, 1927 in Emmet County Michigan to Clifford and Nina (Athearn) Chapin. Willard was the former owner of Chapin Chevrolet in Brooklyn. He was a longtime member of the American Legion and a 32nd Degree member of the Masonic Lodge. Willard was a founding member of the Brooklyn Chamber of Commerce and was a former Treasurer for the Village of Brooklyn. In his leisure time, Willard was an avid golfer who loved his time playing in many leagues at the Hills’ Heart of the Lakes Golf Course as well as watching golf on television. He also delighted in his time traveling in his motorhome. He loved his grandchildren and great grandchildren and never missed an opportunity to ask about their well-being. Willard was part of the “greatest generation” serving in Germany just after WWII. He is survived by Mary F (Mafy) Chapin of Brooklyn; his children, Beth (Bill) Borchardt of Hudson, and Dennis Chapin of Antelope, CA; 5 grandchildren, Andrew (Lisa) Borchardt of Blissfield, Sara Grevera of San Jose, CA and Bryan Grevera of Sunnydale, CA, and Madison Bogdan and Grant Bogdan of Columbus, OH; 3 great grandchildren, Carter, Grant and Brooklyn Borchardt of Blissfield; and stepdaughters, Kelly (Lawrence) Bogdan of Columbus, OH and Karla Hard of Jackson, MI; brothers, Bill Chapin of Rives Junction and Raymond Chapin of Grand Rapids, MI; and sister, Kathy Novak of TN and several nieces and nephews. He is preceded in death by his first wife, Maryann Chapin and sister, Charlotte Wilton. Memorial contributions are suggested to Brooklyn Presbyterian Church. Please leave a message of comfort for Willard’s family or sign his guestbook at www.EinederFuneralHomes.com.

The family of Willard Earl Chapin created this Life Tributes page to make it easy to share your memories.

Send flowers to the Chapin family.