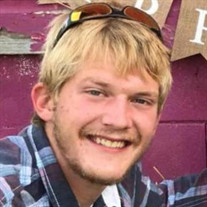 Zachary Grady Howard, 23, of Jerome passed away Wednesday, December 15, 2021 at Henry Ford Allegiance Hospital, Jackson. Zach’s family and friends will gather Sunday, December 19, 2021, from 4:00 pm – 7:00 pm, and Monday from 1:00 pm – 2:00 pm at Eineder Funeral Homes - Brooklyn Chapel. His funeral service will be held on Monday, December 20, 2021, at 2:00 pm with interment to follow at Roseland Memorial Gardens, Jackson. Officiating will be Pastor Rik Hildorn of Crosspointe Church of Brooklyn. He was born on June 28, 1998, in Ann Arbor, Michigan to Kenneth and Jennifer (Gotts) Howard. Zach married the love of his life, Kaylee Caudill, on June 30, 2018, in Parma, Michigan. He will be remembered for his goofy sense of humor and his love of life. Zach lived to make people laugh. He was a hard-working young man that adored his family. Zach loved riding his motorcycle with his wife and belonged to the A.W.A.L.S group. He enjoyed music and dancing. An avid Ford truck fan, he was always tinkering on them. He was employed at Dexter Blocks as a Mason. Zach will greatly be missed by his family and friends. Zach is survived by his wife, Kaylee; his children, Jaxson and Mason; his parents, Kenneth Howard, and Jennifer (David Yost) Gotts; grandparents, Tom (Carolyn) Gotts; a brother, Darrell (Amber) Howard; aunts and uncles, Tom (Viki) Gotts; John (Debi) Gotts; Tim (Caron) Gotts; Tony (Genevieve) Gotts; Joel (Heather) Gotts and Maryanne Howard; many nieces and nephews. He is preceded in death by his daughter, Avalynn Jean Howard; grandparents, Larry & Joyce Head and Kenneth & Carolyn Howard. Memorial contributions may be given to the family for future designation. Please leave a message of comfort for Zach’s family or sign his guestbook at www.EinederFuneralHomes.com.

The family of Zachary Grady Howard created this Life Tributes page to make it easy to share your memories.

Send flowers to the Howard family.